History is on Spain's side against Switzerland, having lost just once in 22 meetings. 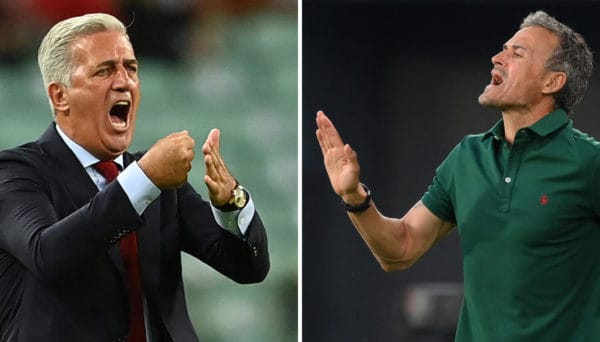 A combination of file pictures created in London on June 30, 2021 shows Switzerland's Bosnian-Swiss coach Vladimir Petkovic (left) in Baku on June 20, 2021 and Spain's coach Luis Enrique (right) in Seville on June 19, 2021. during the UEFA EURO 2020 football championship. - Switzerland take on Spain in St Petersburg on July 2, 2021 in the quarter-finals of the UEFA EURO 2020. (Photo by Ozan KOSE and Lluis GENE / POOL / AFP)

Switzerland will try to follow up their shock elimination of world champions France at Euro 2020 against Spain on Friday after reaching the quarter-finals of a major tournament for the first time in 67 years.

Vladimir Petkovic’s side recovered from two goals down to force extra time against much-fancied France and prevailed on penalties as 2018 World Cup hero Kylian Mbappe missed the decisive spot-kick.

Now the Swiss hope to spring another surprise against a Spain team that has scored 10 times in two games after a slow start to the group stage.

Alvaro Morata’s redemptive strike helped secure a 5-3 extra-time win over Croatia, but Spain will need to cut out the errors if they are to contend for a record fourth European Championship.

The Juventus forward and his family had been subjected to abuse by fans in Seville after he missed a series of chances in the group stage.

History is on Spain’s side against Switzerland, having lost just once in 22 meetings, a 1-0 defeat in South Africa that sparked their run to the 2010 World Cup title.

Sergio Busquets, the Spain captain, is the lone survivor from that team, while the Barcelona midfielder and Jordi Alba are the only two players in the squad left from their Euro 2012 triumph.

The win over Croatia was Spain’s first in a knockout fixture since they beat Italy 4-0 to claim the second of back-to-back European crowns.

“The quarter-final depends on us not our rival. It wouldn’t matter if it were France, the Swiss, Ukraine – we are here to win so we have to face and beat the best,” said goalkeeper Unai Simon.

The Athletic Bilbao ‘keeper suffered an embarrassing lapse of concentration, allowing a Pedri back-pass to roll off his foot for an own goal, but recovered his composure to make a crucial save in extra time.

“It was a miscontrol. I’ve seen it six or seven times now and I’ve got a bit worked up about it,” said Simon, who made his Spain debut last November.

“The sun’s not bothering me and it doesn’t bounce awkwardly… I think I tried to get the ball out of my feet by controlling it instead of stopping it.”

“It’s an accident and something that can be fixed,” he added.

Switzerland celebrated what striker Haris Seferovic called “the most beautiful of nights” as they dumped out France to win their first European Championship knockout tie.

The last time the Swiss reached a major quarter-final they lost 7-5 to Austria as hosts of the 1954 World Cup, the highest scoring game in the tournament’s history.

Fast-forward more than half a century and a first semi-final is within reach for Switzerland, whose Sarajevo-born coach is symbolic of the squad’s multi-cultural composition.

“At the end of the (France) game, I couldn’t speak at all. I was finished, I lost my voice,” said Petkovic, the former charity worker who was appointed in 2014.

However he will have to do without captain Granit Xhaka, whose booking against France means the combative Arsenal midfielder is suspended for the next Euro 2020 game.

“I’ve always said that this team deserves a lot more than what you read,” Xhaka said after Switzerland won their first knockout game since the 1930s.

“There has been so much talk about this team. There’s even been talk that we’re arrogant. But I can guarantee you now that we wrote history.”

The Euro 2020 tie will go ahead in Saint Petersburg as planned, organisers told AFP, despite the city this week posting a new pandemic high for daily virus deaths.

Saint Petersburg, Russia’s second city and one of the country’s main virus hotspots, has seen a surging outbreak due to the highly transmissible Delta variant first identified in India.