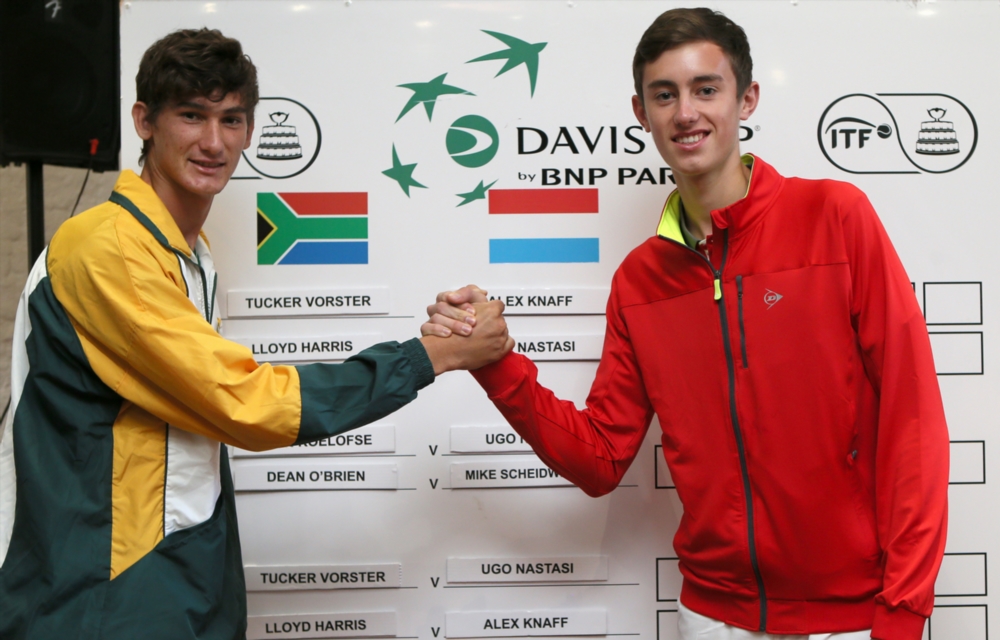 Teenage prospect Lloyd Harris will make his Davis Cup debut on Friday, after being named as the No 2 seed in the final SA team for the home clash against Luxembourg.

Harris was drawn against Ugo Nastasi for the second singles rubber on day one of the Euro-Africa Group 2 tie in Centurion.

“It’s really a dream come true for me,” Harris said at Thursday’s draw.

“I have been in great form of late and feel confident that I can take that form into the weekend. I am ready to give my best.”

Tucker Vorster, the top-seeded SA player, was drawn to face teenager Alex Knaff in the opening singles match, with Ruan Roelofse and Dean O’Brien set to meet Nastasi and Mike Scheidweiler in the doubles fixture on Saturday.

“There might be a bit of pressure playing the first match, but I just need to take care of business and do what I can do,” Vorster said.

“It would be really nice to get that 1-0, but I will focus on my game and I can only do my best.”

Though it had been suggested earlier in the week that Luxembourg’s world No 46 Gilles Muller could turn up for the tie, he was not included in their final team announced by skipper Johny Goudenbouer.

While the hosts were also under strength, in the absence of top-ranked singles and doubles players Kevin Anderson and Raven Klaasen, they remained firm favourites on paper.

Vorster climbed to No 296 in the singles world rankings this week, with 19-year-old Harris rocketing to No 311 after reaching the quarter-finals in his first ATP Challenger tournament in Kyoto last month.

O’Brien and Roelofse were both rated among the top 130 doubles players in the world, further strengthening the home side’s credentials.

Without Muller, Nastasi was the only player included in the Luxembourg side who held an ATP ranking, though he was well outside the top 700 in singles and doubles.

Playing at high altitude at Irene Country Club, Goudenbouer admitted his side had struggled to acclimatise in the build-up to the tie, and he was unsure about their chances against their fancied hosts.

“Five days is not really enough to be ready. You need weeks to get used to the altitude,” Goudenbouer said.

“We almost never play at altitude and we know it will be very difficult here without our No 1, but we’ll try our best and see what happens.”

The winners of the tie will progress to the second round of the Group 2 division, and the losing side will turn out in a relegation battle later this year.