Alkana stormed to victory in 13.43 seconds. 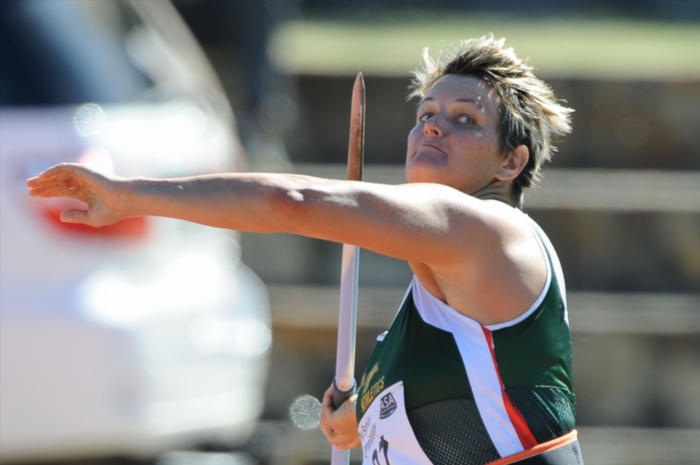 FILE PICTURE: Sunette Viljoen in the women's javelin during day 1 of the SA Senior Championship from Coetzenburg Stadium on April 12, 2013 in Stellenbosch, South Africa. Photo by Roger Sedres/Gallo Images

Sunette Viljoen launched a 64.08m heave to bag her fifth continental title on Saturday, leading the charge as South Africa raked in six more medals on the penultimate day of the African Athletics Championships in Durban.

“I wish I could have thrown further because I felt so good, but I’m still very happy,” Viljoen said.
“There are a few things, just here and there, I can work on (before the Rio Olympics) but everything is there, which is good.”

In the men’s 110m hurdles final, Antonio Alkana stormed to victory in 13.43 seconds, well ahead of Nigerian silver medallist Tyron Akins who ended second in 13.73.

Veteran hammer throw specialist Chris Harmse admitted he was disappointed not to bag gold, despite earning his ninth career medal at the biennial continental championships, as he settled for the silver medal with a best effort of 67.67m.

“This was the lowest point of my career,” Harmse said.

“Usually I’m a good fighter and I can get out of any situation, but I just couldn’t get the rhythm today. My rhythm was haywire.”

Khotso Mokoena, who recently returned to former coach Emmarie Fouche after struggling to find his best form this year, produced a 16.77m season’s best to take the bronze medal in the men’s triple jump.

In preliminary rounds, Wayde van Niekerk impressed with a 20.03 victory in his 200m semifinal, just 0.09 outside his personal best, and suggested he would target Anaso Jobodwana’s SA record of 19.87 in Sunday’s final.

“All of us are chasing to better ourselves, and if in that process a national record comes I’ll be grateful for that opportunity,” he said.

Van Niekerk will line up with teenage compatriot Clarence Munyai in the half-lap final, while Alyssa Conley, Justine Palframan and junior speedster Tamzin Thomas will turn out in the women’s race for the medals.

After winning the women’s 1 500m final the day before, Caster Semenya returned to the track for the heats of her specialist 800m event and coasted into the final, clocking 2:02.01.

Despite falling in the men’s 1 500m heats and trailing home in seventh place in 3:51.55, national record holder Johan Cronje did enough to progress, joining compatriot Dumisani Hlaselo in the line-up for the final.

World Championships finalist Wenda Nel had no trouble in the heats of the women’s 400m hurdles, winning her race in 55.33 and booking her place in the medal contest.

After four days of competition at Kings Park Athletics Stadium, the national squad had secured a total of 24 medals, with 11 gold, seven silver and six bronze.