Lions to face Highlanders in semis

Ellis Park was a cauldron of joy in sending the most successful team in Super Rugby packing back to New Zealand, ensuring a spot for the Lion in the semi-finals. 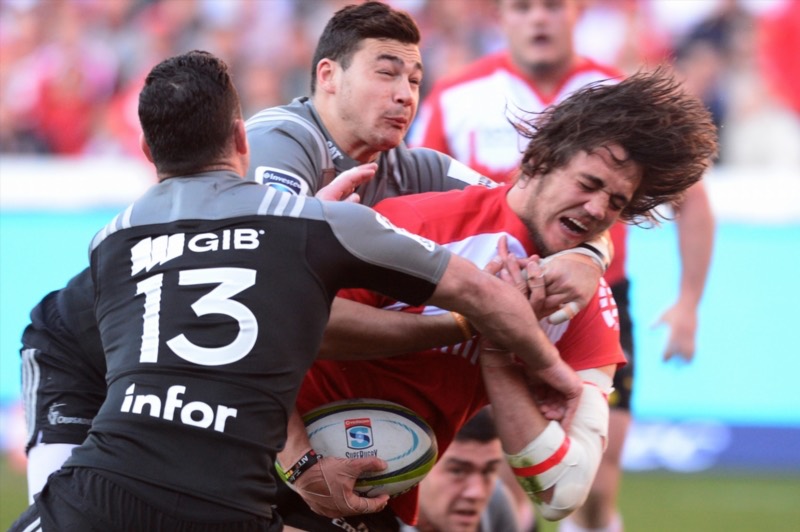 Franco Mostert of the Lions during the Super Rugby match between the Emirates Lions and Crusaders at Emirates Airline Park on July 23, 2016 in Johannesburg, South Africa. Picture: Gallo Images

Proving they are worthy title contenders, as Ellis Park almost erupted on Saturday night, the Lions outplayed the seven-time champions Crusaders 42-25 to book their place in the Super Rugby semifinals next weekend, crucially also at home.

The top seeded team going into the quarter-finals were the Hurricanes, and their comprehensive 41-0 win over the Sharks in Wellington means they will host a semi-final as the highest seeded team. The Hurricanes will play the Chiefs who beat the higher ranked Stormers 60-21 in Cape Town.

The second semi-final will be hosted by the Lions who were too strong at home in Johannesburg beating the Crusaders 45-25.

The Lions outscored the Crusaders by five tries to three with the visitors’ final try only a consolation score by replacement back Ben Volavola in the 78th minute to give some respectability to the final scoreline on a dominant night for the Lions.

The Lions’ fourth try in the 70th minute by wing Ruan Combrinck after an inside pass from centre Lionel Mapoe clinched matters for the home side, who then went into a 35-20 lead and the Crusaders then had to fight against more than just the altitude.

Replacement Ross Cronje scored the home team’s fifth try five minutes from time when he found a favourable bounce from a kick from Mapoe to push the score up even further to 42-20.

With the Lions scoring three tries to one in the first half for a 22-10 lead at the break, the Crusaders closed the gap to 22-13 seven minutes into the second period with flyhalf Richie Mo’Unga landing his third straight successful kick of the evening.

Lions flyhalf Elton Jantjies ensured the gap grew again to 12 points when he landed a drop goal in the 54th minute for a 25-13 lead with the Crusaders pushing hard for a gap in the Lions defence.

Jantjies increased the lead to 28-13 with a penalty before a controversial try was awarded to the visitors to close the gap again to 28-20.

The try was awarded to replacement back Mitchell Drummond, but he was clearly in front of his fullback, Israel Dagg, who touched the ball while airborne, which put Drummond in an off-side position.

Earlier, a blitzkrieg of two Lions tries inside the opening seven minutes caught the Crusaders by big surprise, ensuring a Lions lead of 12-0 inside seven minutes.

First it was left wing Courtnall Skosan who scored the opening try in the second minute, already ghosting through two Crusaders defenders to put his team up 5-0 after Jantjies failed with the conversion.

In the seventh minute, centre Rohan Janse van Rensburg bulldozed his way over from close range and, with Jantjies on song this time with the conversion, the Lions went up 12-0.

In the eighth minute, Crusaders lock Luke Romano received a yellow card underlining the Lions’ dominance at this stage of the game for a professional foul.

It could have been even a bigger gap after scrumhalf Faf de Klerk intercepted and, despite the support from Skosan and lock Franco Mostert, was stopped short of the line.

In the 12th minute, Janse van Rensburg also chipped and collected but failed to recognise right wing Ruan Combrinck on his right who had a open path to the tryline after the first scrum of the game resulted in the Lions crushing the Kiwis.

Jantjies did get a chance to stretch the score to 15-0 with a penalty in the 15th minute before the Crusaders opeedn their score in the 20th minute with a penalty by flyhalf Richie Mo’Unga to trail 15-3.

The visitors, however, started fighting their way back in the contest by scoring their first try by centre Ryan Crotty in the 34th minute after camping in the Lions’ 22 and, with Mo’Unga converting, it was only 15-10 to the Lions despite dominating proceedings in the opening half an hour.

A telling blow was struck by the Lions just before half time when hooker Malcolm Marx crashed over for the third try after a driving maul and, with Jantjies on song again with the conversion, the Lions were in control, 22-10 at the break.