All this on a day where structures weren't top priority and where the spectator numbers were too low to mention. 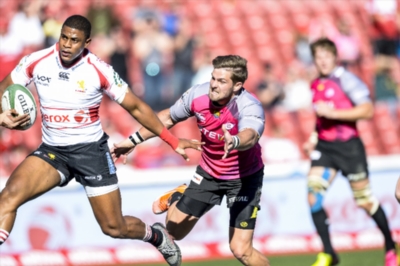 The Lions opened their defence of the Currie Cup they won last year in the best way possible after running the Pumas ragged to score a big 68-26 win at Ellis Park on Saturday.

With 14 tries and 94 points scored in the game, with 10 tries going the way of the rampant Lions, it was high entertainment, but huge gaps on defence appeared too rapidly.

The Lions scored five times in the first half another five in the second to sum up their dominance, while the Pumas at least secured a bonus point by scoring their fourth in the dying seconds.

On a day where structures weren’t top priority and where the spectator numbers were too low to mention, the Lions showed that despite missing a number of players they will still be a strong force, but their discipline probably needs addressing.

Dazzling running from the likes of wing Anthony Volmink and fullback Sylvian Mahuza caused havoc with the Pumas’ defence which wasn’t up to Currie Cup standards to be really honest.

Not even two yellow cards could prevent the Lions from playing adventurous running rugby in the first half as they stormed to a 35-14 lead.

Only eight seconds – a new Currie Cup record – passed before the Lions scored their first try through lock Lourens Erasmus straight from the kickoff for a 7-0 lead.

But then followed their first yellow card to hooker Akker van der Merwe for a dangerous and high tackle in the seventh minute on Pumas wing Marcelo Sampson.

Pumas flyhalf Francois Brummer failed however with the penalty and in the 10th minute flyhalf Jaco van der Walt scored the Lions second try after a great break in midfield by fullback Sylvian Mahuza for a 14-0 lead.

In the 11th minute, however, they got their second yellow card to prop Jacques van Rooyen for a cynical foul on his own goal line and after that great confusion existed because the Lions had 14 players on the field instead of 13, resulting in referee Stuart Berry to order replacement prop Justin Ackermann off the field and penalising the home side.

Three more tries followed by wing Anthony Volmink, flank Cyle Brink and Mahuza – probably the try of the season – which was started in the Lions in-goal area by centre and co-captain Howard Mnisi.

The Pumas to their credit fought back with tries by centre Marlou van Niekerk after catching Stokkies Hanekom off-guard, while prop Kwezi Mona scored from close range after a well orchestrated maul.

Tries by hooker Akker van der Merwe in the 46th minute to be followed quickly by the seventh by centre Howard Mnisi just three minutes later saw the scoreline growing to 47-14.

The Lions eighth try was scored only 13 minutes later in the 62nd minute by wing Koch Marx and with Marnitz Boshoff having replaced Van der Walt at pivot the conversion was no problem as the score was boosted to 54-19.

Boshoff himself scored the ninth try in the 72nd minute and after converting his own try the tally climbed to 61-19.

The quick Volmink wasn’t done yet to score his second in the 78th minute and the Lions’ 10th to complete the rout.

The Pumas salvaged a valuable bonus point with their fourth try in the last seconds by replacement Devon Williams to at least walk away with something from the match.