I knew I had a big jump in me – Luvo Manyonga

Manyonga stunned the field and the world after first winning a personal battle against drug addiction. 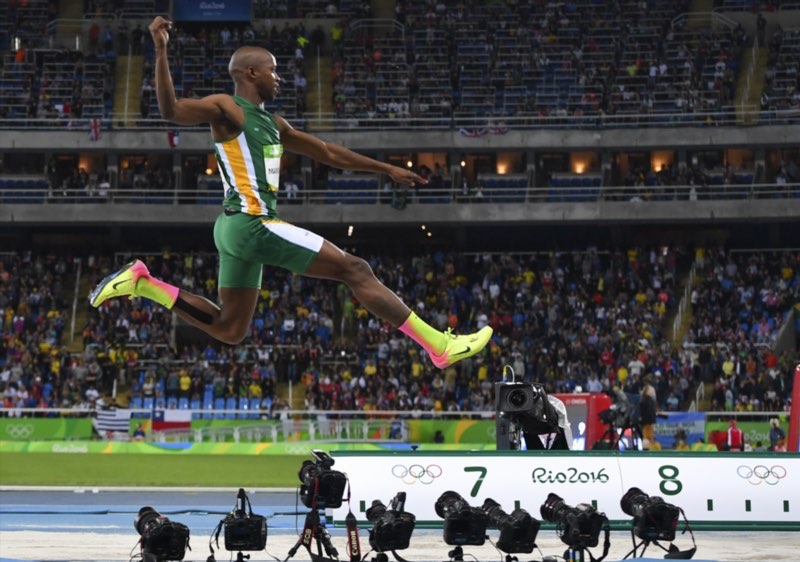 Luvo Manyonga of South Africa in the mens long jump final during the evening session on Day 8 Athletics of the 2016 Rio Olympics at Olympic Stadium on August 13, 2016 in Rio de Janeiro, Brazil. Picture: Gallo Images

After stunning the men’s long jump field, putting his personal demons to bed and narrowly missing out on an Olympic gold medal yesterday morning, Luvo Manyonga is chasing the stars with no apparent cap on his potential.

The 25-year-old athlete, who returned to competition this season after winning a lengthy battle against recreational drug addiction, racked up another triumph to step on the podium at the multisport showpiece, grabbing the nation’s first track and field medal in Brazil.

Manyonga launched a personal best effort of 8.37m in the penultimate round and was looking good for gold, but Jeff Henderson of the United States snatched the title with his final attempt, landing one centimetre further with a jump of 8.38m to take the title.

Manyonga was nevertheless delighted with his effort.

“I have risen above my demons,” he said. “They have tried all these years to bring me down, but now I have made it.”

Manyonga, who fouled two of his first three jumps, shocked his competitors with a distance of 8.28m in the fourth round. Invigorated, the 25-year-old then flew 8.37m on his next attempt, putting him on course for Olympic gold.

“I knew I had something big in me. I felt it in me, it was growing inside,” Manyonga said. “I wanted to get more. If there was an extra jump, a seventh jump, I promise you, it would have been a massive one.”

Manyonga’s coach, Neil Cornelius, said he had no troubles working with an athlete who faced a doping ban for methamphetamine and was lost to the sport for a few years in the early stages of his senior development.

But Manyonga was then whisked off to Pretoria by SA Sports Confederation and Olympic Committee president Gideon Sam late last year to work with Cornelius at the high-performance centre.

“I tend not to focus on his past, I try and focus on him as an athlete,” Cornelius said. “As an athlete it’s been exciting, like the first time you get into a Ferrari. You have a big smile on your face and you just want to go fast.”

With Manyonga, a former world junior champion, believing he could one day challenge American Mike Powell’s world record of 8.95m, Cornelius believed the supremely talented athlete could achieve any dream he summoned from within himself.

He opted not to predict how far he could leap with a few consistent seasons of training.

“There’s no limit to what he can achieve. If I put a distance on it, I’m limiting him and his potential is limitless.” – additional reporting by Reuters