Caster ignores the barbs to focus on gold

While personal probes and questions may have made her reluctant to put her foot on the pedal in her younger years, Caster Semenya is having none of it now. 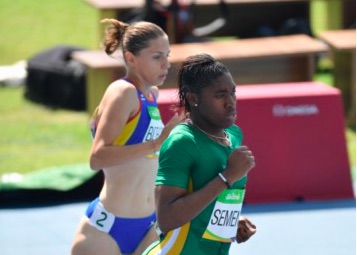 Caster Semenya of South Africa during the Women's 800m Heats on Day 12 Athletics of the 2016 Rio Olympics at Olympic Stadium on August 17, 2016 in Rio de Janeiro, Brazil. Picture: Gallo Images

Facing a potential barrage of ridicule and harassment from the media and her opponents, Caster Semenya no longer cares what other people think of her and says she is at the Olympic Games to chase one goal – winning the 800m gold medal.

With a reignited gender debate raging in the background, Semenya takes to the Olympic Stadium track in the early hours of tomorrow. But while personal probes and questions may have made her reluctant to put her foot on the pedal in her younger years, she’s having none of it now Semenya wants only to prove she’s the best 800m runner in the world.

“I’m not focused on people,” she said yesterday, after coasting to victory in her semifinal in 1min 58.15sec. “I’m more focused on my race. “At the end of the day, this is a championship and it’s not about people, it’s all about you. You against the world.”

After a decision made by the Court of Arbitration for Sport (CAS) last year apparently allowed her to stop taking medication, which capped her natural testosterone levels, Semenya found the best form of her career and broke her own SA record when she clocked 1:55.33 in Monaco last month.

Having experienced a global backlash after winning the 2009 world title at the age of 18, the CAS decision and Semenya’s improved performances reopened a complex debate about what defines men and women and at what point the line must be drawn to make competition fair across the board.

A number of other elite athletes were born with hyperandrogenism, reportedly including her 800m opponents Francine Niyonsaba of Burundi and Kenyan star Margaret Wambui. Due to her ability, however, Semenya took the brunt of criticism levelled against athletes who were born with the condition.

The firm favourite to win the two-lap title in Rio and tipped by some people to better the 33-year-old world record of 1:53.28 held by Jarmila Kratochvilova, Semenya was not allowing herself to get sucked into the debate.

Protected by SA team management this week, she did not conduct any interviews after her first round heat or semifinal and the reaction from the foreign media and her opponents was much tamer than anticipated.

That could all change after the final, particularly if Semenya reaches the top step of the podium – but with the support of the SA team and millions back home, she was not allowing it to worry her in the build-up to the medal race.

“I don’t have any strategy for the final. I’ll just go with the flow,” she said.