With another nail-biting finish, the Pumas edged the visiting side 26-24 in the dying minutes. 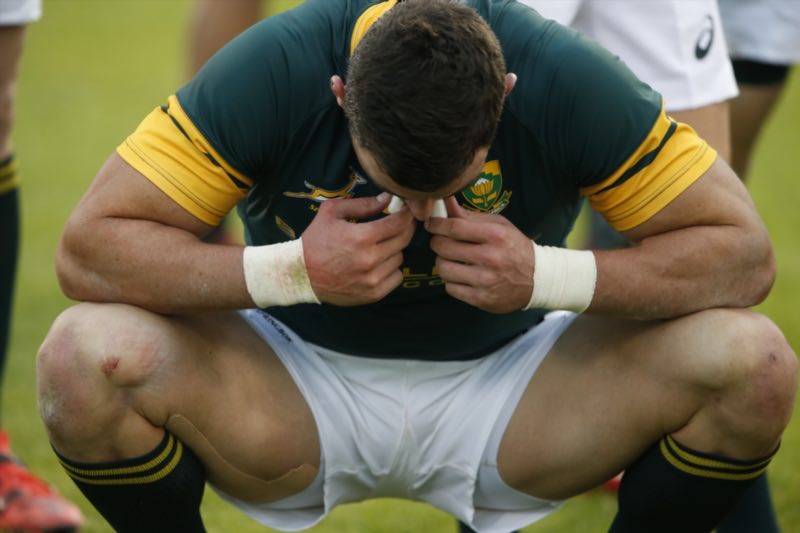 Argentina made history by narrowly beating the Springboks 26-24 in Salta in their Rugby Championship Test on Saturday night in a hugely tense affair.

It was the first time Argentina had beaten the Boks on their home soil and, after laying the foundation in the first half to lead 13-3 at the break, they showed huge fight in the second half to hold off a strong Bok fightback.

Argentina used the breakdowns as a base for the entertaining play from their back division while the brittle defensive structures of the Boks left gaping holes, which the Pumas gladly exploited.

To start the Boks revival, flyhalf Elton Jantjies kicked a penalty in the 43rd minute that was followed by their first try by veteran wing Bryan Habana to level matters 13-13 in the 45th minute.

Flank Juan Manual Leguizamon put Argentina back in charge after collecting a great aerial kick into the corner by Juan Martin Hernandez to go back into the lead at 20-13 by the 48th minute.

Hernandez then also kicked a penalty after taking over the duties from injured flyhalf Nicholas Sanchez for a 23-13 lead by the 54th minute.

Veteran flyhalf Morne Steyn was send on to replace Jantjies and, after missing his first attempt in the 51st minute, he scored a penalty in the 64th minute to reduce matters to 23-16.

Replacement lock Pieter-Steph du Toit gave the Boks a glimmer of hope by scoring the second Bok try in the 68th minute and after Steyn again missed with the conversion it was 23-21 to the homeside.

A 73rd minute penalty by Steyn put the Boks into a unlikely lead of 24-23, but a 77th minute penalty by Argentina replacement Santiago Iglesias put the home side back in front at 26-24, the eventual final score.

After an initial brisk start to the game the Boks started to fall off their defensive structures as Argentina took control halfway through the first half, starting to dominate territory and possession.

Bok flyhalf Elton Jantjies missed his first penalty in the third minute, but then was on song with his second in the 20th minute when Pumas prop Ramiro Herreira was yellow-carded for not using his arms in a clean-out and it was 3-0 to the Boks.

However, it was this time when the Pumas started to take control and flyhalf Nicholas Sanches levelled scores in the 23rd minute 3-3 when the Boks were caught off-side at the ruck.

In the 30th minute Bok prop Vincent Koch was penalised for a high tackle and Sanchez had no problem making it 6-3, but it soon became worse for SA when fullback Joaquin Tuculet scored the first try of the game to make it 13-3 after Sanchez added the conversion.

Jantjies missed his second penalty from three attempts on the stroke of half-time, which left the Boks with a mountain of work left going into the second 40.

Salmaan Moerat on his neck injury, his return to play and his Bok chance
13 hours ago
13 hours ago

Salmaan Moerat on his neck injury, his return to play and his Bok chance
13 hours ago
13 hours ago