Team SA has bagged five medals in the Paralympic games so far. 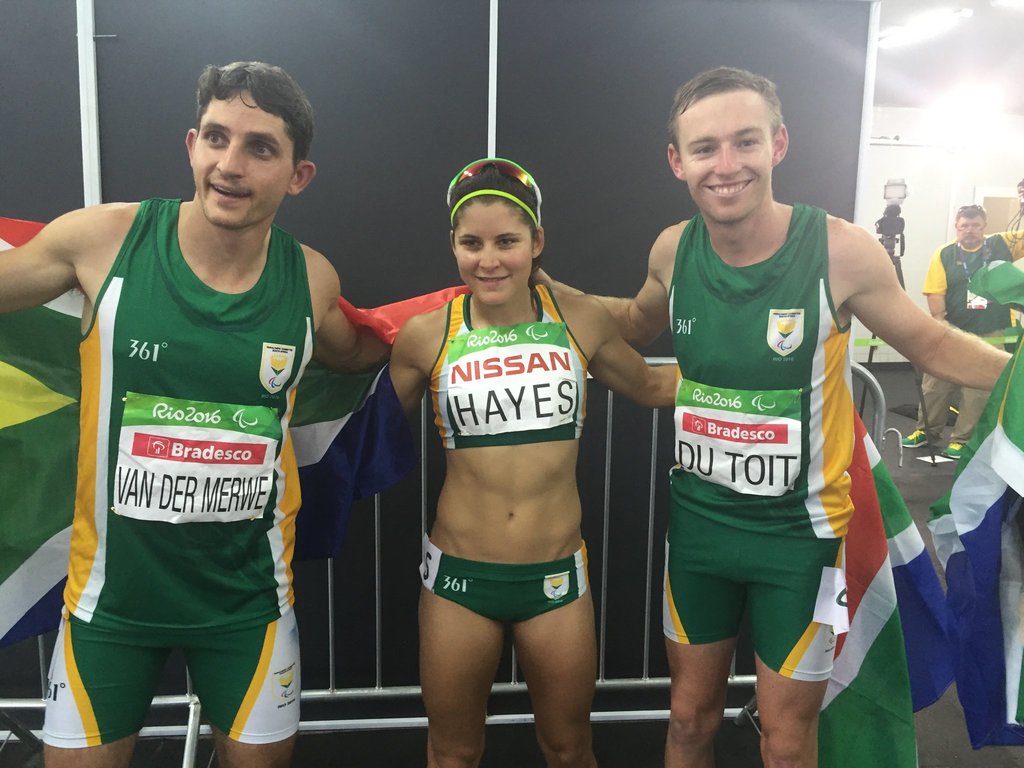 Team SA raked in three more medals in the early session on Sunday, with sprinters Charl du Toit, Fanie van der Merwe and Ilse Hayes all stepping on the podium at the Paralympics in Rio.

Du Toit won the men’s 100m T37 final in 11.45, crossing the line 0.03 outside the world record he had set in the heats. His countryman, defending champion Van der Merwe, grabbed the bronze medal in 11.54. In the women’s 100m T13 final, Ilse Hayes earned silver, storming across the line in 11.91, with Ukrainian athlete Leilia Adzhametova setting a global best of 11.79 to win gold.

Elsewhere, at the rowing regatta, the mixed four crew of Shannon Murray, Lucy Perold, Dylan Trollope and Dieter Rosslee took fifth place in the A final in 3:28.39, and Sandra Khumalo finished fourth in her single sculls B final in the AS class in 5:58.77.

In the swimming pool, 100m breaststroke gold medallist Kevin Paul qualified sixth fastest (2:15.09) for the 200m individual medley SM10 final, to be held early Monday morning (SA time), while Alani Ferreira finished seventh in her 100m breaststroke SB13 heat in 1:27.52, missing out on a place in the final.

On the wheelchair tennis court, Evans Maripa was eliminated from the men’s singles contest, with Japanese player Takuya Miki securing a 7-6(1) 7-5 win in their second-round clash. Powerlifter Chantell Stierman ended sixth in the women’s U-61kg division, lifting 80kg, and veteran shooter Von Zeuner Kohne was 20th in the qualifying round of the mixed P3-25m pistol-SH1 competition and was unable to progress to the semifinals.

The SA team had earned five medals – three gold, one silver and one bronze – midway through the fourth day of competition at the multi-sport Games.