It was the Cheetahs' fifth title and their biggest win in a Currie Cup final after being undefeated in the tournament. 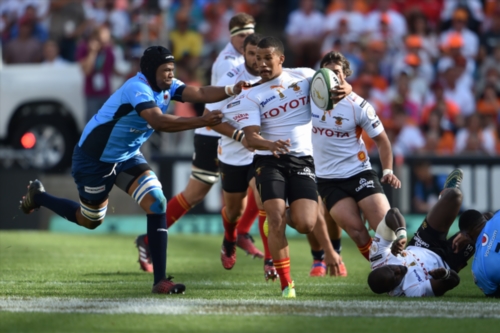 Surrounded by a sea of orange flags, the victory celebrations started in the Free State capital after the Cheetahs won the Currie Cup on Saturday afternoon by outplaying the Blue Bulls 36-16 to win the trophy the first time since 2009.

The Cheetahs, who led 18-9 at the break, became only the third team to win the trophy unbeaten after the Sharks in 1996 and the Lions last season.

It was the Cheetahs’ fifth title and their biggest win in a Currie Cup final after the 1976 win of 33-16 against Western Province.

For the Blue Bulls, who were simply swamped by the wave of Cheetahs attacks, their resilience on defence needs to be applauded, but they were simply outplayed on the day.

With the Cheetahs holding a lead of 21-9 after Marais slotted his seventh penalty, the first try of the final was only scored by fullback Clayton Blommetjies in the 63rd minute.

But what a brilliant try that was to put the cherry on their sublime unbeaten Currie Cup campaign.

The try was started after an intercept by wing Sergeal Petersen and, with brilliant support play, the final pass by captain Francois Venter sent Blommetjies away to the huge delight of the 43 400 strong crowd.

And with Fred Zeilinga, who replaced the cramping Marais, making the conversion the score increased to 28-9 and just four minutes later Zeilinga added yet another penalty to send the Cheetahs up by 31-9.

To the Blue Bulls credit they hit back to score their only try through replacement scrumhalf Piet van Zyl to reduce the Cheetahs’ big lead to 31-16 by the 74th minute, but it was a little too late.

Zeilinga also made the telling break for the new champions’ second try to send Petersen away and, while Zeilinga missed the conversion, the triumph was complete.