The ultra-distance veteran wants to use the Om die Dam road race as a platform for an assault on this year's Comrades title. 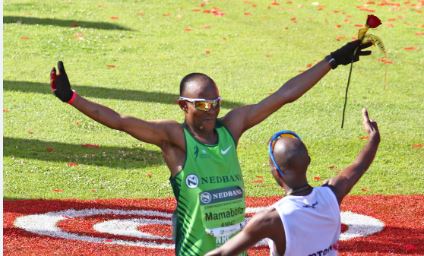 Ludwick Mamabolo doesn't want to be a bridesmaid at the Comrades this year again. Photo: Anesh Debiky/Gallo Images.

Ultra-distance runner Ludwick Mamabolo hopes to use the Old Mutual Om die Dam road race in Hartbeespoort this weekend to gauge his preparation, as he aims for his second title at the Comrades Marathon later this season.

Mamabolo, who will turn out for the Nedbank Running Club’s Green Team in the 50km contest on Saturday, finished second at Om die Dam last year and won the race back in 2003.

“Om die Dam is sort of a barometer for me to show whether I am on track to run a good Two Oceans (56km in Cape Town in April) and Comrades,” Mamabolo said this week.

Though he was likely to be in contention on Saturday, as one of South Africa’s most consistent ultra-distance runners, Mamabolo believed the race for the title would be wide open.

Another quality line-up was expected to compete on the scenic course around Hartbeespoort Dam at the 28th edition of the annual race.

“As far as I am concerned, everyone who lines up alongside me can win on a good day as they must have done the similar sort of hard training as I have done and I expect them to be as hungry as I am to win,” he said.

Regardless of his finishing position, Mamabolo felt the Om Die Dam race would give him an indication of his fitness level in the build-up to the 87km Comrades ‘up’ run between Durban and Pietermaritzburg in June.

The 39-year-old athlete, who won the Comrades ‘down’ run in 2012, has finished in the top four at five of the last seven editions of the prestigious race.

Still competing at the highest level, Mamabolo was eager to reclaim his Comrades crown.

“People perceive me to be just a good ‘down’ runner but they are wrong and I am going to prove it to them this year, barring a serious injury,” he warned.