It’s all about form, not medals for Cornel Fredericks

The hurdler's injuries over the past two years means most have forgotten a brilliant 2014 but he's ready to show his mettle again. 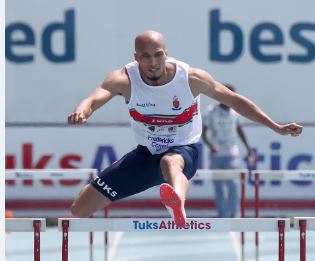 Having shaken off an Achilles injury which hampered his progress over the last two years, Cornel Fredericks is eager to regain his best form this season, and he could get his first real chance to prove himself in Potchefstroom on Friday.

After clocking 49.27 seconds in Pretoria last month, the fastest time in the country this year in the one-lap sprint over the barriers, he was preparing to face a world-class line-up at the national championships.

Also read: There’ll be no treble for Caster Semenya in Potch

“After some setbacks last year I made some changes, and it has paid off early in the season,” Fredericks said.

A former finalist at the World Youth Championships, Fredericks set his personal best of 48.14 in Durban in April 2011, and he enjoyed a spectacular campaign in 2014 when he won the Commonwealth Games, Continental Cup and African Championships titles.

He was repeatedly knocked back by injury, however, and after withdrawing from the 2015 World Championships, he failed to qualify for last year’s Rio Olympics.

Bursting back into form, his season’s best set in the capital city a few weeks ago was his fastest performance in nearly three years.

With Olympian Le Roux Hamman (49.37), Constant Pretorius (49.57) and national record holder LJ van Zyl (49.99) all dipping under 50 seconds in the domestic campaign, Fredericks was facing a battle in an attempt to take the national crown from former World Championships medallist Van Zyl.

But he insisted he was more concerned about his own progress than chasing medals.

“I don’t think I have anything more to prove in South Africa. I just need to run fast times,” he said.

“One of the changes I made this year was that I usually have a later start to the season, but I started earlier and I’ve had a few races to help me prepare for the rest of the season.”