The Bulls are past the point of still keeping Nollis Marais

He's been in the job for two years and, despite playing New Zealand sides this year, the Bulls haven't shown any progress. 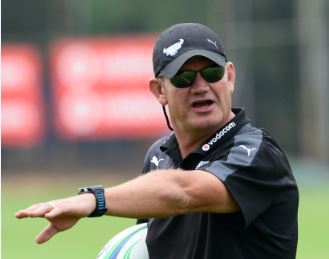 There’s no point trying to dissect and review what happened in the Bulls’ Super Rugby meeting with the Crusaders at Loftus on Saturday.

The scoreline of 62-24 in favour of the rampant New Zealanders says everything that needs to be said.

It’s time for the Bulls to show guts and make decisive changes.

When teams perform poorly, the common complaint is that the coaches are easy targets and that players are spared or even absolved.

However, the Bulls’ poor form in 2017 is down to Nollis Marais and his coaching staff.

They’ve shown they simply aren’t up for the rigours of mentoring a Super Rugby side.

In fact, they’ve suffered the biggest embarrassment any group of coaches can experience: pundits say the Bulls don’t look like they’re being coached.

It’s a damning indictment, one that should be enough for the Blue Bulls Company to decide to look for new coaches.

The horror show at Loftus was a perfect example of how aimless the Bulls have been in 2017.

They missed 35 tackles, made 23 handling errors, conceded 10 penalties and only had a scrum success rate of 56% (they lost four on their own throw-in).

What does that tell you?

It tells you the Bulls pretty much did nothing right.

They couldn’t put the opposition under pressure because they never held onto the ball long enough.

And the couldn’t even establish a basic platform like a decent scrum.

Saturday’s game was no exception, just the nightmare that was waiting to be realised.

They lost to the Sunwolves for the first time in their history.

Saturday’s loss is the biggest ever at Loftus.

Marais has good ideas and when he talks, he’s honest and sincere.

But he’s been thrust into a responsibility he’s not ready to fulfill.

The Bulls will raise the argument that South African rugby is in a cycle where it needs to promote upcoming coaches to build depth again.

What they would be forgetting is that other unions who promoted rookies at least had some top-level experience before.

Robbie Fleck was Allister Coetzee’s deputy till the Springbok coach left the Stormers.

When Frans Ludeke left the Bulls at the end of 2015’s Super Rugby campaign, Marais was promoted straight from the Under-21s.

There was no apprenticeship … and unfortunately, it’s showing.

The Bulls’ intentions might’ve been noble in promoting Marais.

Heck, it also saved the union – who’s financially under pressure – some money.

The strategy has failed.

The Bulls need to redeploy or let Marais and his assistants go and bite the bullet on a proven mentor.

Otherwise, the end is nigh.