Semenya went on to take gold in the one-lap final on Saturday. 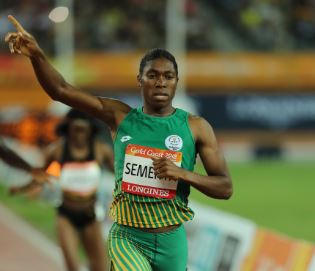 Caster Semenya made a statement after dropping down in distance at the weekend, shrugging off a controversial rule change and a raging global debate on the sidelines, as she coasted to a dominant victory over some of the country’s top sprinters at the SA Student Athletics Championships in Sasolburg.

Having clocked 51.87 on Friday to win her 400m heat by nearly four seconds, Semenya went on to take gold in the one-lap final on Saturday.

She stormed home in 50.48, just 0.08 outside the personal best she set when she won the 400m race in her only international appearance over the distance at the Brussels Diamond League meeting in September 2016.

Semenya had also been expected to compete in the 200m event on Sunday for only the second time in her career, just three days after the International Association of Athletics Federations (IAAF) opted to apply a rule which would prevent her from racing over distances ranging from 400m to the mile (1.609km) without taking hormone suppressing medication.

After being included in the 200m start lists, however, Semenya was not listed in the official results.
In her absence, Palframan won the half-lap final in a personal best of 22.83.

It was widely speculated that the IAAF decision may return to court, or Semenya could choose to move up to the 5 000m event, a distance over which she had never raced.

The 200m event was also an option, though her ability over the shorter distance remained unclear, with sprints and middle distances requiring the development of different muscles and techniques.

The new IAAF rule, which classified hyperandrogenic women as athletes with a Difference of Sexual Development (DSD), was set to be enforced in November.