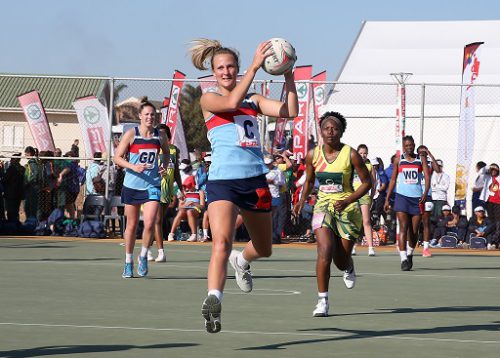 Jeante Strydom of Tshwane in action against Bojanala during day 1 of the Spar national netball championships at Lotto Young Park on July 09, 2018 in Port Elizabeth, South Africa. (Photo by Reg Caldecott/Gallo Images)

Last-minute withdrawals and late arrivals created a logistical nightmare on Monday, Netball South Africa admitted, with the structure of the tournament having to be adjusted on the opening day of the Spar National Netball Championships.

While organisers had initially expected 12 teams to participate in the A-division, the Johannesburg district side arrived late and was scratched from the programme, with tournament rules stating that squads had to be registered by 10am on the first day of competition.

Having communicated with Johannesburg team management ahead of the deadline, tournament director Mami Diale said they had to put their foot down in order to set a precedent.

“Once you make changes for a team that comes late, you will be accountable for it, and you’ll have to do it over and over for the other teams as well,” Diale said.

Due to an administrative error, Ethekwini had been entered in the A-division after the district had registered to compete in the B-division, and they too had to be scratched from the top-flight section.

With 10 teams remaining, the A-division format was adjusted and two pools were combined into one group for the round robin stages.

Meanwhile, eight B-division teams had either withdrawn on the eve of the tournament or arrived too late to register.

Their absence had also forced organisers to make multiple changes to the second-tier fixtures.

After reverting to a more inclusive format this year, which resulted in entries from a record 87 senior and Under-21 teams, Diale said NSA understood the resource constraints faced by the districts.

Had their withdrawals been communicated in advance, however, it would not have caused the chaos which left officials in a relative panic on Monday morning.

“It has created logistical issues and a lot of work,” Diale said.

“We have managed to sort it out, but it was important that we adhered to rules and regulations.”

On the court, title favourites Tshwane got off to a cracking start.

The only A-division team to compete in two games on day one, they beat Bojanala (Rustenburg) 90-20 before crushing Sarah Baartman (Kimberley) 113-13 to take the early lead in the standings.