Saffa golfers have some big name partners at St Andrews

Music lover Haydn Porteous in particular will have a great time with the company he's keeping. 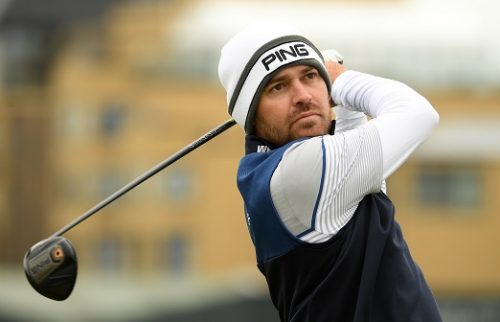 Louis Oosthuizen of South Africa tees off on the fourth during previews prior to the 2018 Alfred Dunhill Links Championship at The Old Course on October 3, 2018 in St Andrews, Scotland. (Photo by Ross Kinnaird/Getty Images)

Talking in terms of South African currency, there is a small fortune to be made, the equivalent of R11-million, for the winner of the Alfred Dunhill Links Championship beginning on Thursday over the Old Course at St Andrews.

But, the money aside, this European Tour event features a pro-am running alongside the main tournament and, for the 26 South African professional golfers in the line-up, it offers them a unique opportunity to partner with some of the big names in the entertainment and business world for four days.

Haydn Porteous, for instance, loves his music and to have renowned Bon Jovi drummer Tico Torres as his partner in a fourball that also includes legendary singer, song writer and actor Huey Lewis, well, it’s going to be a blast for Porteous.

Talking about big names, big is the operative word with respect to the players in Jaco van Zyl’s group.

Apart from packing a killer punch, the Ukranian is passionate about his golf and a keen chess player.

Brandon Stone, hoping to “Make mine a double!” in this part of the world after his stunning Scottish Open triumph in July, has famous American art dealer Alex Acquavella as his amateur partner, in a group that also includes Padraig Harrington and his amateur, JP McManus, one of Ireland’s richest men.

Ernie Els is with his dad, Neels, Branden Grace partners tournament boss and Richemont chairman Johann Rupert, with Tommy Fleetwood also in their group, while Louis Oosthuizen has Sunshine Tour Commissioner Selwyn Nathan as his partner.

Trevor Immelman and Dean Burmester also have actors as amateur partners, Burmester with Matthew Goode, and Immelman alongside “As Good As It Gets” Oscar nominee Greg Kinnear.

George Coetzee is with former rugby Springbok Rob Louw who, being a keen surfer himself, was smiling when the draw was made because his own sporting hero, surfing legend Kelly Slater, is the other amateur in the fourball.

He’s playing off an adjusted two handicap this week and has been known to break 70 on his day.

Jacques Kallis, though, is the celebrity that everyone believes is the hottest amateur golfer in the pro-am.

He made a mountain of runs in his day, took hundreds of wickets, and now he’s making birdies – loads of them.

He plays off an adjusted scratch handicap here in Scotland.