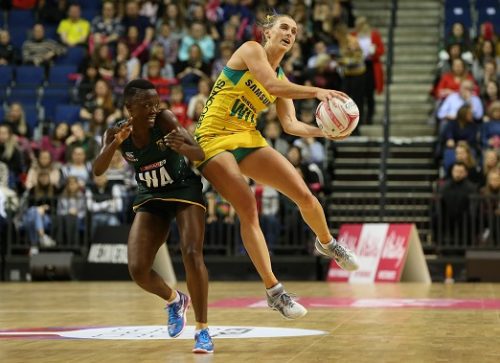 Gabriellle Simpson (R) of Australia in action with Bongiwe Msomi of South Africa during the Vitality Netball International Series match between South Africa and Australian Diamonds, as part of the Netball Quad Series at Echo Arena on January 13, 2019 in Liverpool, England. (Photo by Nigel Roddis/Getty Images)

With her team gearing up for another title defence at the World Cup later this year, Australia coach Lisa Alexander admitted they were given a shake by the Proteas netball team in their season-opening match in Liverpool on Sunday night.

Given an opportunity to compete in the English City which will host the World Cup later this year, South Africa got off to an explosive start in their Quad Series clash but lost their grasp in the latter stages of the match.

Despite their impressive accuracy up front and solidity on defence, they ultimately fell in a 62-45 defeat.

“The South Africans were fantastic, particularly in the first quarter, so we’re very pleased with the final result,” Alexander said.

Guided by former Australia head coach Norma Plummer, the Proteas displayed real intent from the start, putting the pressure on their fancied opponents as they surged into a 16-11 lead in the opening quarter.

With the global champions hitting back, they carried a narrow 27-25 advantage into the half-time break, but the battle continued as the lead exchanged hands a few times in the second and third stanzas.

Strengthening their grip on the match, however, the Australians were 43-38 ahead at the end of the third quarter, and they romped clear in the final 15 minutes to secure a convincing victory.

With only a few chances left to sharpen up and gain the confidence to close out games in the build-up to the World Cup, the Proteas had a few days to gather themselves ahead of their next Quad Series match against hosts England in London on Saturday.

They were then scheduled to meet New Zealand in their final fixture of the campaign in the English capital on Sunday.