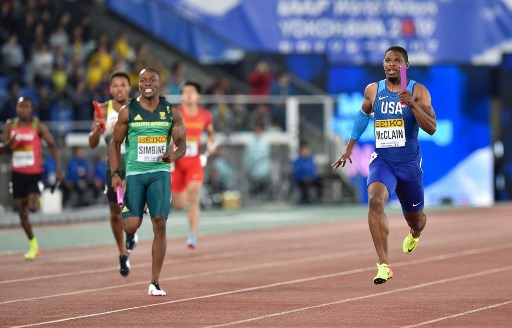 Remontay McClain of the US (R) competes with Akani Simbine of South Africa during the men's 4x200 metres relay final at the IAAF World Relays athletics event at Nissan Stadium in Yokohama on May 12, 2019. (Photo by Kazuhiro NOGI / AFP)

Akani Simbine fought hard in a thrilling 100m battle on Saturday, dipping under 10 seconds in his first race of the year over the short sprint distance at the second leg of the Diamond League track and field series in Shanghai.

Leading a large South African contingent in his first international appearance of the campaign, after the Commonwealth Games champion had focussed on the 200m event throughout the domestic season, Simbine rocketed over the line in 9.95 seconds to take third place.

And with the men’s 200m contest attracting a strong field, despite not being an official Diamond League race, Clarence Munyai did well to reach the podium.

Making a comeback after shaking off some injury concerns, Munyai displayed fine form by clocking a season’s best of 20.37.

The rest of the South African athletes struggled to put up a fight at the top-flight meeting.

Zarck Visser settled for sixth place behind Samaai in the long jump, with a best effort of 7.90m, while world champion Luvo Manyonga was scratched from the start lists and did not compete.

Antonio Alkana settled for eighth place in the men’s 110m hurdles race, crossing the line in 13.47, and African record holder Sunette Viljoen was well below par in the women’s javelin throw, also finishing eighth with a best heave of 57.56m.