Another win for in-form Proteas at World Cup

It also seems as if coach Norma Plummer's rotation system is working a treat. 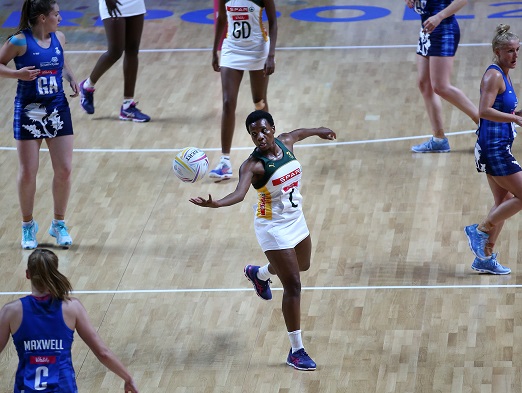 Khanyisa Chawane of the SPAR Proteas in action during the Vitality Netball World Cup match between South Africa and Scotland at M&S Bank Arena on July 15, 2019 in Liverpool, England. (Photo by Reg Caldecott/Gallo Images)

South Africa remained unbeaten after four matches at the Netball World Cup, coasting to a 66-38 victory over Scotland in Liverpool on Monday night.

After coach Norma Plummer again experimented with her squad by making multiple changes to the starting team, the Proteas took some time to find their feet in their opening clash of the second round.

While Scotland raced to an early 8-6 lead, however, the Proteas soon took control and they were five points ahead (15-10) at the end of the first quarter.

Strengthening their grip on the match, the South Africans held a 32-20 advantage at half-time, and though Plummer continued to tweak the team by rotating the bench, they were not really troubled by their opponents in the second half.

“We wanted to get everyone into the mix but you’ve also got to give them time to settle, so I restricted the changes to the end of quarters and half-time,” Plummer said.

“I felt we were in control of the game after the first quarter, and we were able to settle down and work on our ball.”

Dominating up front, with goal shooter Lenize Potgieter sinking all 30 of her attempts in the first half before Sigi Burger netted 26 of her 29 shots, the Proteas were also firm on defence, virtually shutting out the Scottish team.

Plummer had repeatedly stated the need to test their combinations, in order to counter any injury troubles they may face in the latter stages of the tournament, and defender Karla Pretorius felt they had proved they could succeed with multiple options.

“We managed to get a few combinations out there and I think everyone did really well,” said Pretorius, the Player of the Match.

Needing to finish among the top two in their group to reach the semifinals, the Proteas were well placed to progress to the next round, tied on six points with Commonwealth Games champions England at the top of the table.

They needed to negotiate their way past Uganda on Wednesday, however, before their final fixture of the group stages against the host nation on Thursday.