He missed the cut by one shot, but it felt like he was chasing the title 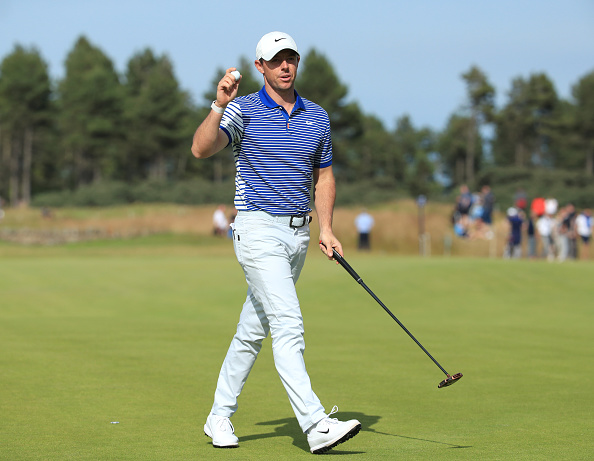 Rory McIlroy of Northern Ireland reacts following his putt on the 18th green during Day 4 of the Aberdeen Standard Investments Scottish Open at The Renaissance Club on July 14, 2019 in North Berwick, United Kingdom. (Photo by Andrew Redington/Getty Images)

He wondered whether they would show up in droves or in something more akin to trickles. He reckoned they might consider his 79 on Thursday, his quadruple-bogey start and his triple-bogey finish, too ghastly to follow more on Friday. Would they go ahead and deem him a “lost cause” and move along to other golfers or distant beer taps?

He’s Rory McIlroy, the four-time major winner from Northern Ireland whose Royal Portrush daydream spent Thursday eroding in a nightmare, and they’re the great, sturdy faces of British Open galleries, often standing beside tees and greens and fairways in weather that qualifies as appalling. They’re an essential part of the annual tapestry, especially those that appear to have weathered untold rains and winds.

At 3:10 p.m., he emerged through the little grandstand tunnel to the No. 1 tee alongside U.S. Open champion Gary Woodland and longtime English contender Paul Casey. He, McIlroy, couldn’t imagine the five hours that awaited. It became somehow both a great disappointment (a cut missed by one harsh shot) and “one of the most fun rounds of golf I’ve ever played,” McIlroy said.

That’s because they, the faces, lined the first hole three-deep, four-deep, five-deep, and they shouted encouragement such as, “You’re only 16, Rory,” a reference to the fact he shot 61 here at age 16. They rang the five hours and the 7,344 yards under the leaky skies with the forgiving, cajoling refrains of, “Come on, Rory!” They forgave, and, better yet, they loved. They turned a chase for the cut into something that felt like a chase for the claret jug, and they created what figures to remain one of the most memorable among golf’s millions of missed-cut rounds.

Through McIlroy’s heady second-round 65 and his oft-breathless bid to hang on for the weekend, they reminded through their backing of McIlroy that while it’s very much an Open crowd – knowledgeable, respectful – it’s an Open crowd on this side of the sea and that matters deeply.

Yet the galleries reminded that even on a day when Northern Ireland’s three stars went from a bundle of emotions (McIlroy) to agony (Darren Clarke, who missed the cut through the impossible agony of reaching No. 18 one shot clear but then triple-bogeying) to narrow success (Graeme McDowell nudged by right on the cut at 1 over par), McDowell’s words soared.

“Without getting into politics or religion, because that’s not a good thing to get into around here, it’s symbolic,” McDowell said in a region that spent the late 20th century riven with sectarian strife. “It’s a shift. It’s a move on. It’s a step from our past. It shows how many hurdles we’ve overcome, how far we’ve come as an island, really. This is not just about Northern Ireland. This is about the whole country of Ireland. Because we’re very proud of our golf. And golf has always united this country.”

Proof lined the ropes and barricades for the splashiest of the Northern Irish chances, McIlroy. It filled the grandstands, the people huddled like proud parents in raincoats against the droplets. It turned up in the passageways between the holes when McIlroy often would smack litanies of hands, especially small ones.

As he and they coursed through the holes with the stunning sea views and the holes with vistas of the town and its Ferris wheel in the distance, a star who doesn’t get home as much as he used to came to feel . . . home. “As much as I came here at the start of the week saying I wanted to do it for me, you know, by the end of the round there today I was doing it just as much for them as I was for me,” McIlroy said. “I wanted to be here for the weekend. Selfishly I wanted to feel that support for two more days.”

It built and built and built, brooding skies be damned. He birdied number 3 but sprinkled some groaning pars around that early on, so that just before he birdied No. 7, a woman in the gallery said, “Is he going to make the . . .?” whereupon a man said: “No chance. No chance.”

He moved along, often puffing his cheeks with air before exhaling or looking at the sky by the sea on the way from No. 5 to No. 6. The round went through rain and the stoppage of rain.

His tee-shot trip to a green-side bunker on the par-3 No. 13 set him back a bogey. He would need three birdies from five holes. He dunked in what looked like a hard 10-footer on a ridge for a birdie on No. 14. He smashed down a strong 12-footer for a birdie on No. 16. He needed one more birdie from two holes.

He couldn’t get it, narrowly missing on No. 17 even after sending a beauty from benign rough to within maybe 18 feet and sending his approach from the fairway on No. 18 off an embankment and into the impossible. The crowd noise rose with the shot, then ebbed with its descent. So he walked up No. 18 at this most meaningful of Opens for him and for so many witnesses, and then something happened.

The cheer began, and it sustained itself for longer than any in the day. It went on and on, from beneath the traditional flags of all the countries, as he doffed his cap repeatedly. It felt like a Sunday – on a Friday. Then he did the best he could with the impossible chip, finished, shook all the hands, stopped on his way into the tunnel, turned and waved. He looked gutted but felt “thankful” and “humbled” and “disappointed” and “unbelievably proud.”

“Look, it’s a moment I envisaged for the last few years,” he said. “It just happened two days early.”