Despite a near-farcical outcome, the popular South African southpaw was on top of his game and did exactly what was asked of him in Germany. Kevin Lerena successfully defended his IBO cruiserweight championship belt for a sixth time with a sixth round stoppage victory over Firat Arslan at the EWS Arena in Goeppingen, Germany on Saturday night.

Despite a near-farcical outcome, the popular South African southpaw was on top of his game and did exactly what was asked of him.

Lerena, who has always stated he will fight all comers, will be hoping he now gets his proposed unification bout with one of the other top cruiserweight world champions.

Arslan, 49, may have bitten off more than he could chew in his quest to become the oldest fighter to win a world championship but
despite an impressive record, at times it seemed like he never belonged in the same ring as Lerena.

The 27-year-old South African, nicknamed “The KO Kid”, used his quick hands, flawless footwork and high work rate to take the German, 22 years his senior, to school from the opening bell.

In fact, the home fighter’s ostentatious entrance into the EWS Arena and the pre-fight proceedings probably lasted longer than the entire time he spent in the ring engaging the champion.

Lerena boxed from behind an educated, stinging jab and wasted little time setting about breaching his opponent’s ultra-defensive, high-gloved defence.

Besides the odd non-toxic uppercut which did pierce Lerena’s guard and a series of tentative stabs at his opponent, Arslan failed to trouble the champion.

A stinging right rocked Arslan’s head back in the fifth round and after a relentless salvo in the sixth, which wobbled him and caused him to drop his guard, his trainer threw the towel in.

The meek surrender drew jeers from the crowd and even Arslan himself wasn’t impressed with his handlers. 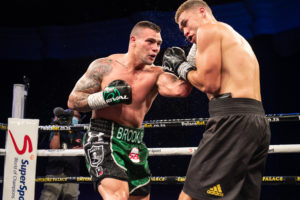 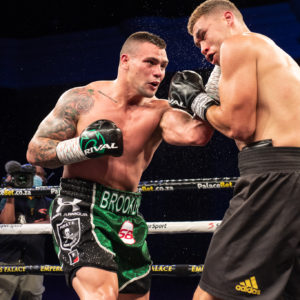 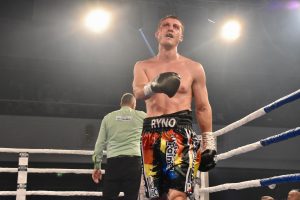