Clijsters determined to press on with comeback

Kim Clijsters is looking forward to returning to the US Open even though the coronavirus pandemic means that since her second comeback from retirement she has spent more time with her family. 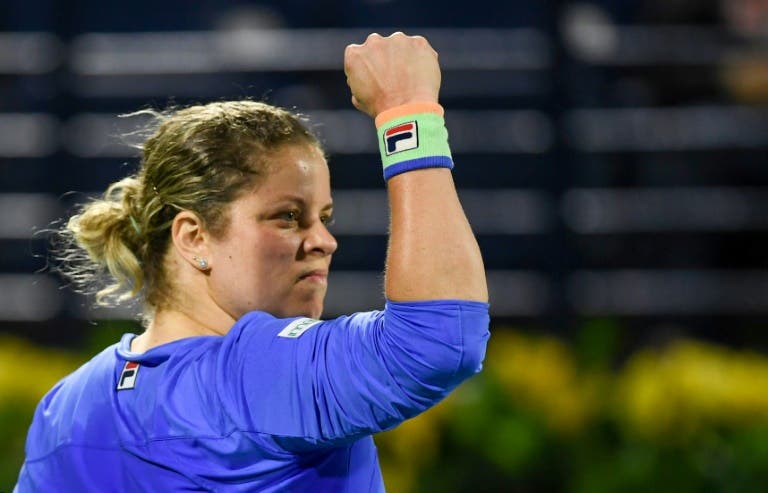 Kim Clijsters is determined ro press on with her interrupted comeback . AFP/File/KARIM SAHIB

“I hope we can still play this season. But even if we don’t, I intend to keep going,” the Belgian tennis star, who turns 37 in June, told Het Laatse Nieuws (HLN).

Clijsters had spells at number one before and after her first retirement, from 2007-2009. She had her daughter in 2008. She won the US Open before that break and the Australian Open and two more US titles when she came back. She retired for a second time after the US Open in 2012. She has since had two sons.

“I always felt I was fulfilled,” Clijsters said in an earlier interview with the Tennis Hall of Fame. “After I had our third baby, Blake, I started travelling to tournaments. I did commentary.

“But I still felt more like a player. A little itch started.”

Returning to the tour poses a challenge for a mother of three.

“I’m away a little bit, which turned out to be not so much in the last few months,” she said.

She began her second comeback in February in Dubai, where she lost to Garbine Muguruza in the first round. She then lost to Johanna Konta in her opening match in Monterrey, the last tournament before the women’s tour shut down at the start of March.

She was in the United States when the tournament in Indian Wells, where she planned to play singles and partner Venus Williams in the doubles, was cancelled. The family stayed at their home in New Jersey, where they don’t have a tennis court and the public courts soon shut.

“We made a court with kitchen chairs,” she said.

“In the first few weeks when you’re in quarantine and all these challenges pop up…you’re trying everything,” she said. “After a few weeks it’s ‘another challenge? I’m done!'”

The family returned to Belgium and quarantined for two weeks.

Clijsters told HLN that the break had allowed her to rest her body and allow injuries in her knees to improve.

“If the US Open can happen, I want to be ready,” she said in the Hall of Fame interview. “I would also be happy if I had to play on court 18. I don’t have to be out on Arthur Ashe “