Canned cheers and cardboard spectators greeted the return of professional sport to Australia Thursday with the Parramatta Eels beating the Brisbane Broncos as the National Rugby League resumed after a lengthy coronavirus break. 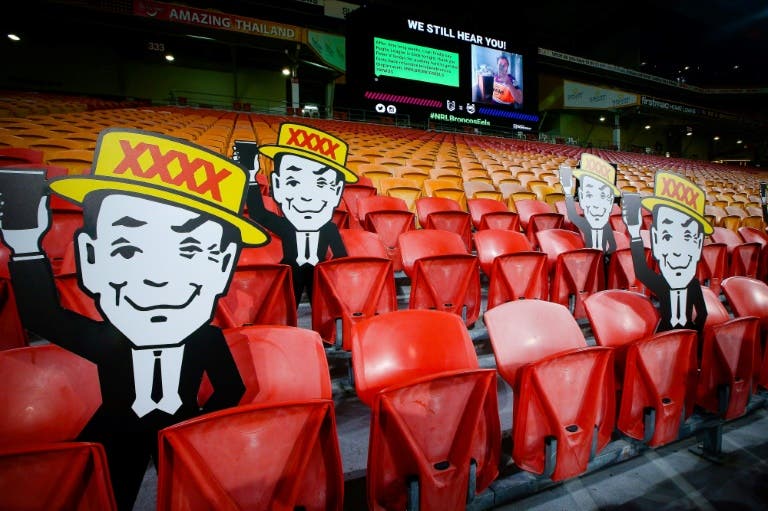 Cardboard cutouts from a beer sponsor were placed in the stands as rugby league resumed in Australia. AFP/Patrick HAMILTON

While the match was played behind closed doors and under strict health protocols, there was no shying away in the tackle as players from both sides launched into bone-crunching hits.

The Eels scored six tries to one for a 34-6 victory that keeps them on top of the ladder with three wins from three.

The fact that the match went ahead at all was a triumph for the NRL, which faced ridicule when it first announced plans to resume its season after the virus-enforced closure in late March.

At Brisbane’s 52,000-capacity Suncorp Stadium — dubbed “The Cauldron” due to its usual intense atmosphere — there were just a few dozen cardboard cutouts of fans in the stands, promoting a sponsor’s beer.

“Please turn it off” and “it’s dumb, get rid of it” were just some of the responses on social media.

The broadcaster said there was unprecedented global interest in the match, which was screened in the United States, Britain, New Zealand and across much of Europe to an estimated worldwide audience of 300 million.

Before the match, the NRL ran online adverts aimed at overseas viewers unfamiliar with the sport declaring “no helmets, no pads, no fear, no worries”.

Precautions to minimise the threat of infection included medics taking player temperatures, with orders to exclude anyone with the slightest hint of fever.

The ball was wiped down with disinfectant every 10 minutes, and coaches were not allowed to prowl the sidelines.

Parramatta took the lead after just three minutes through Marata Niukore, who received hugs and pats on the head from his teammates.

Brodie Croft hit back in style mid-way through the first half, wrong-footing Parramatta’s defence with a dummy pass then out-sprinting two defenders to touch down.

Winger Maika Sivo made it 12-6 at half time for the Eels before the Broncos wilted after the break, conceding four unanswered tries.

It wasn’t quite the record-breaking 58-0 humiliation the Eels inflicted on Brisbane last year, but it was enough to send a message that they will be among this year’s pacesetters.

Australian Rules football will not resume until June 12, while no dates have yet been set for Super Rugby and football’s A-League.

While the NRL has stolen a march on its competitors, officials needed to overcome numerous hurdles to meet the May 28 restart deadline and limit the sport’s hiatus to nine weeks.

During the shutdown, there were off-field scandals involving players breaching quarantine rules, top-level resignations and revelations about the sport’s dire finances.