Seventy-two players have been confined to their Melbourne rooms 24 hours a day, forced to strike balls against mattresses and exercise as best they can. 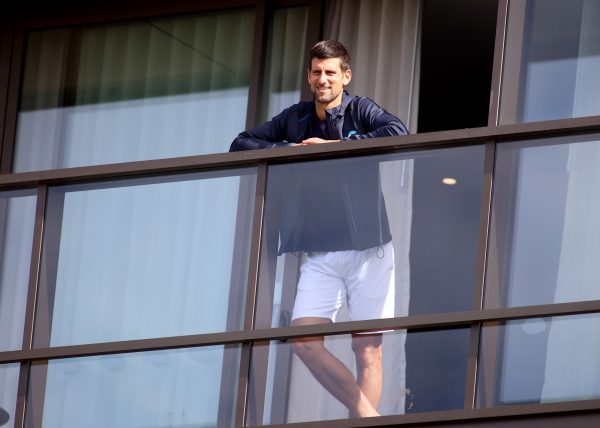 Novak Djokovic looks out from the balcony at M Suites, in North Adelaide, on Thursday after two weeks in quarantine. Tennis players and support staff have been confined to their hotel rooms but will now be allowed out to practice ahead of the start of the Australian Open. Picture: Getty Images

The world’s top tennis stars are set to emerge from a gruelling two weeks stuck in their hotel rooms over coming days as they race to get match fit before their coronavirus-disrupted season resumes in Australia.

Seventeen charter flights jetted the cream of the sport into Melbourne and Adelaide this month ahead of the delayed Australian Open, with everyone on board whisked into 14 days of mandatory quarantine.

The plan was to allow them five hours a day to practise outside, and many have enjoyed the privilege.

But eight positive Covid-19 cases from the more than 1,000 players, coaches and officials who arrived in largely virus-free Australia threw preparations for others into disarray.

Seventy-two players have been confined to their Melbourne rooms 24 hours a day, forced to strike balls against mattresses and exercise as best they can, sparking complaints about the tough conditions.

But the ordeal is ending, with the first players expected to taste freedom on Thursday evening, and others let out gradually depending on when their flights touched down.

A bumper six ATP and WTA tournaments await them beginning on Sunday, all at Melbourne Park and squeezed into a week to make up for lost time in the lead-up the season-opening Grand Slam on February 8.

Spanish great Rafael Nadal, who is gunning to win a 21st Slam title, moving him past the injured Roger Federer, said he felt “privileged” to play at all given the devastation wrought by the pandemic globally.

“It’s a different situation than usual, it’s much more sad for everyone,” he told CNN this week.

“But at least we’re here, we’re going to have a chance to play here. The world is suffering in general, so we can’t complain.

“I feel that we are privileged people today, having the chance to keep doing our jobs,” he added.

It was a pleasure talking to you Christiane. Thanks for your time https://t.co/uYlJjnzVlV

While most players flew into Melbourne, Nadal, Williams and other superstars including Novak Djokovic and Naomi Osaka arrived in Adelaide, where they will play an exhibition on Friday.

They have enjoyed the five-hour daily blocks of training while staying in reportedly bigger and better rooms, leading to mutterings about preferential treatment.

Nadal will start his season there with a two-set clash against world number three Dominic Thiem, while world number one Djokovic gets under way against young Italian Jannik Sinner.

They then head to Melbourne with Djokovic, Nadal, and Thiem playing in the ATP Cup from Tuesday, an event slimmed down to 12 teams from the usual 24.

A third event, the Grampians Trophy, begins Wednesday for players in hard lockdown who have not been able to train at all, including Victoria Azarenka and Angelique Kerber, both former Australian Open winners.

Barty has been sidelined for almost a year after opting out of travelling due to the pandemic, but said she expected to click quickly into gear.

“The last two or three weeks have been a kind of a little bit impatient, kind of itching, getting ready to play,” she said.

“But it’s been a long pre-season … and certainly ready to go now.

“I can’t wait to be out there and as players we have to be extremely grateful and appreciative of the opportunity we get to play,” she added.

While the top players have yet to play this season, others tuned up at the WTA Abu Dhabi Open, won by world number seven Aryna Sabalenka, and the ATP Antalya Open, where Australian Alex De Minaur triumphed.

Pole Hubert Hurkacz was champion at the Delray Beach Classic, the only other tournament played so far this year.