Recovering Woods ‘touched’ by show of support from fellow golfers

"I guess for us it's just a gesture to let him know that we're thinking about him and we're rooting for him," Rory McIlroy said. 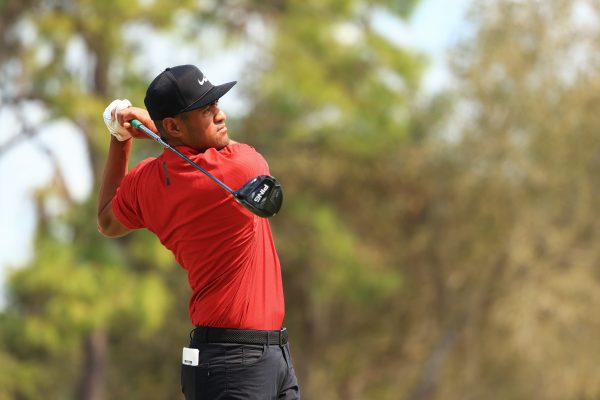 Tiger Woods, recovering in hospital after surgery for serious leg injuries received in a solo car smash, tweeted thanks Sunday for a show of support from fellow pro golfers.

“It is hard to explain how touching today was when I turned on the tv and saw all the red shirts,” the 15-time major champion said in a tweet.

“To every golfer and every fan, you are truly helping me get through this tough time.”

It is hard to explain how touching today was when I turned on the tv and saw all the red shirts. To every golfer and every fan, you are truly helping me get through this tough time.

A host of golfers at the World Golf Championships Workday Championship in Bradenton, Florida – and quite a few at the LPGA Tour event in Orlando, as well – took the course for their final rounds wearing Woods’s signature Sunday colors of red and black.

The PGA Tour tweeted a picture of the maintenance staff at its Puerto Rico Open on Sunday all turned out in red and black.

Former world number one Rory McIlroy, Tommy Fleetwood and Tony Finau at the WGC and Phil Mickelson at a PGA Tour Champions event were some of the players who turned out wearing Woods’s iconic color combo.

“I guess for us it’s just a gesture to let him know that we’re thinking about him and we’re rooting for him,” McIlroy said. “Obviously things are looking a little better today than they were on Tuesday, but he’s still got aways to go.

“He’s got a huge recovery ahead of him. But I think (it’s) just for everyone to show their appreciation for what he means to us out here.

“If there was no Tiger Woods, I just think the tour and the game of golf in general would be in a worse place.

“He’s meant a lot to us, he still does mean a lot to us and I think that was just a little way to show that.”

The first time @McIlroyRory has worn red and black in his career. ????⚫ pic.twitter.com/mpXDbJreOD

Collin Morikawa lifted the trophy at Concession Golf Club in Bradenton, becoming joining Woods as the only players to win both a major title and a WGC crown before turning 25.

“Tiger means everything to me,” Morikawa said. “Yes, he had the crash and thankfully he’s okay and will make a quick recovery.

Woods, 45, underwent hours of emergency surgery to repair what doctors called “significant orthopaedic injuries” to his lower right leg and ankle on Tuesday after his early morning crash on a steep, winding road in suburban Los Angeles.

He was transferred to Cedars-Sinai Medical Center in Los Angeles for further treatment and recovery on Wednesday night and on Friday was reported in a statement posted on Twitter to be in good spirits after follow-up treatment for his injuries.

Woods faces a lengthy recovery from his injuries, which include open fractures affecting both the upper and lower portions of his lower right leg, along with injuries to the bones of the foot and ankle.

Woods was already recovering from his fifth back surgery – and hoping he would be able to prepare for a run at the Masters in April – when the crash occurred.