Grace, who carded a six-under-par 66 to finish on 19 under, had glanced skywards after chipping in for his eagle on the penultimate hole. 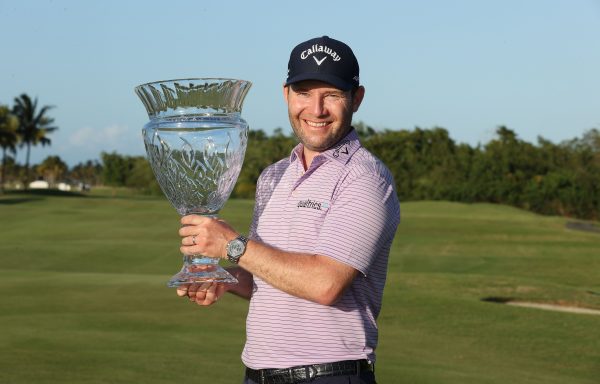 The 32-year-old from Pretoria, whose father died from Covid-19 in January, holed out from a bunker for a brilliant eagle two on the 17th before making a birdie on the last to seal victory at Rio Grande’s Grand Reserve Golf Club.

Grace, who carded a six-under-par 66 to finish on 19 under, had glanced skywards after chipping in for his eagle on the penultimate hole.

He later credited inspiration from his late father for his aggressive approach to the closing holes, where he needed to pick up shots to have any chance of overhauling clubhouse leader Jhonattan Vegas.

“My old man passed away not too long ago, and he always said I’m an aggressive player and I knew he was watching over me,” Grace said.

“It was good. I was just able to hit the shots that I needed. I just stayed in the moment, in the zone. I played the right shot at the right time. I got aggressive.

“I spoke to my my wife today and she said that my dad’s watching over me and he’ll give me the guidance I needed, and he did.”

Grace’s remarkable finish was agonising viewing for Venezuela’s Vegas, who had looked to have done enough for victory with a seven-under-par 65 that included eight birdies and one bogey.

Vegas had led Grace by two shots going into the final two holes, only to be denied by the South Africa’s superb eagle two and closing birdie. Vegas finished on 18 under.

There was disappointment too for overnight co-leaders Grayson Murray and Rafael Campos.

Murray looked to have given himself a chance to challenge for a share of the lead after a birdie on the 17th, but sent his tee shot on the 18th out of bounds to effectively end his chances of forcing a playoff.

Murray and Campos, who both carded closing two-under-par 70s, finished three off the lead on 16 under.