Wallaby skipper Michael Hooper says his short-term move to Japan has proved “refreshing” and he is enjoying the chance to get to know former All Blacks captain Kieran Read.

The 29-year-old flanker is on a six-month stint with Japanese Top League side Toyota Verblitz before returning to Australia in late May ahead of an expected Test series against France and then the Rugby Championship.

Despite facing Read more than 30 times over a decade in Test matches and Super Rugby, the two men never had time to socialise.

But they are now teammates at Verblitz and Hooper admitted he was enjoying the chance to make friends with the big No 8.

“Of all the times, once in a change room after a game was probably the only time we’ve really met before,” 105-Test veteran Hooper told rugby.com.au of Read.

“Other than that, you shake hands, walk off the field and fly halfway around the world to the next game. It’s been refreshing.”

Before heading to Japan, Hooper had played his entire career in Australia and he said the move overseas has opened his eyes, likening the experience to cricket’s Indian Premier League where rival big-name stars often end up on the same team.

Along with Read, Hooper also has Springboks fullback Willie le Roux at Verblitz, while Wallaby centre Samu Kerevi is playing alongside All Blacks superstar Beauden Barrett at Suntory Sungoliath.

“I’ve heard a lot of cricketers, when they speak about the IPL, say they are able to meet guys, chat with people they’ve played against for a long time,” Hooper said.

“It’s making that community of elite players closer and there’s a sharing of ideas.

“It hadn’t really dawned on me until coming up here where Kieran, myself, Willie and other players have been able to talk about anything and everything.” 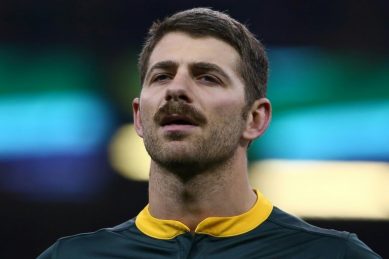 While Hooper is enjoying his time in Japan, he has also been keeping an eye on his long-time Super Rugby club NSW Waratahs, who have had a woeful start to the season, leaking 102 points in their opening two games.

The disastrous results have heaped pressure on coach Rob Penney and Hooper said it had been hard watching from a distance.

“It’s very tough. I love the club, love the Waratahs, love a lot of the guys in there, so I know they’ll be doing it tough,” he said.

“But there are some really good eggs in there who will be doing everything they can to swing that around.”