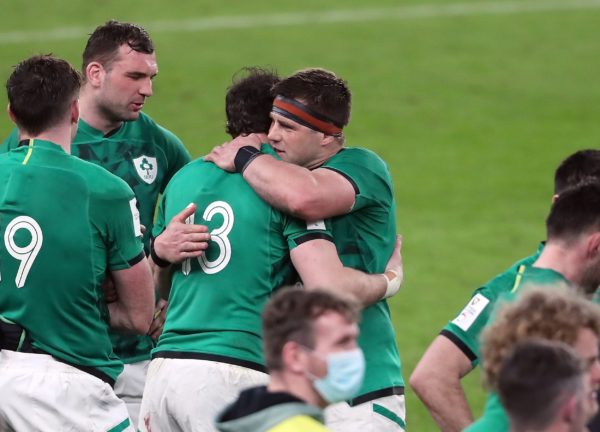 Ireland beat England 32-18 to end a run of four successive defeats by their opponents and give CJ Stander a perfect end to his Test career in the Six Nations match on Saturday.

The hosts had to play for the final 17 minutes with 14 men after Bundee Aki was sent off but held on for their most impressive win since Andy Farrell took over as head coach following the 2019 World Cup.

Ireland finish above England, whose poor title defence has seen them lose to Scotland, Wales and Ireland in the same tournament for the first time since 1976.

ALSO READ: Come on CJ Stander – you’re way too young to be retiring

“That was the performance we wanted against one of the best sides in the world who we have massive respect for,” Ireland captain Johnny Sexton told ITV.

“That is the standard we have set now and hopefully we can keep backing it up.

“We showed great guts throughout the tournament. Sometimes when you don’t take your chances, sometimes your performances don’t look as good as they should.”

“We knew it was going to be a really physical encounter. The past three times we have played them it has been all about physicality and today was no different.

“A bit of discipline cost us here and there. In the last 20 we showed a bit more of a glimpse of what we’re about.”

ALSO READ: ‘Confident’ Willemse gets the thumbs up from Stormers coach

Ireland took the lead with a stunning solo try by Keith Earls, the veteran winger taking a knockdown from Jack Conan, but still with a lot of work to do.

He darted inside, beat Jonny May for pace and touched down for his 34th try in his 93rd Test, Sexton converting.

Farrell brought up 500 Six Nations points with a penalty but Sexton then added one of his own for 13-6 entering the final 10 minutes of the first-half.

Ireland put together arguably their most fluent attacking play of the tournament in stretching the English on both flanks in the lead-up to their second try.

No 8 Conan rumbled over for the try but it was effectively set up with a stunning catch by Hugo Keenan, beating Daly to the ball inside England’s 22 after Sexton’s up and under.

Sexton converted to make it 20-6 at half-time.

England ruined a great chance to hit back at Ireland at the start of the second-half.

Daly won a penalty but from the resulting line-out England were penalised for crossing.

Earls then touched down acrobatically from Sexton’s kick but it was ruled out due to a knock on by Cian Healy earlier in the move.

They did come away with an extra three as Sexton converted a penalty for 23-6.

The Irish roared on the hour mark as if they had won the match when they were awarded a penalty — a red-faced Tadhg Furlong bellowing like a banshee.

Sexton did not let the occasion go flat as he added another penalty.

However, the hosts joy turned to frustration when Aki got red carded, for the second time in his Test career, after his shoulder made contact with Billy Vunipola’s head.

Ironically Aki’s exit saw Peter O’Mahony come on for his first appearance after serving a three-match ban for a red card in the opening loss to Wales.

England took immediate advantage with Ben Youngs sniping over although Jacob Stockdale’s defence could be questioned.

Daly missed the conversion, but the flawless Sexton allayed Irish nerves with two penalties to make it 32-11.

The Irish went down to 13 men when the outstanding Conor Murray was sin-binned in the dying minutes.

But that came way too late for England even though May added a consolation try which was converted by Daly, leaving an emotional Stander embracing his Ireland teammates before an imminent return to his native South Africa.