The Highlanders were without six prominent players who were dropped for breaching what coach Tony Brown called "the team code". 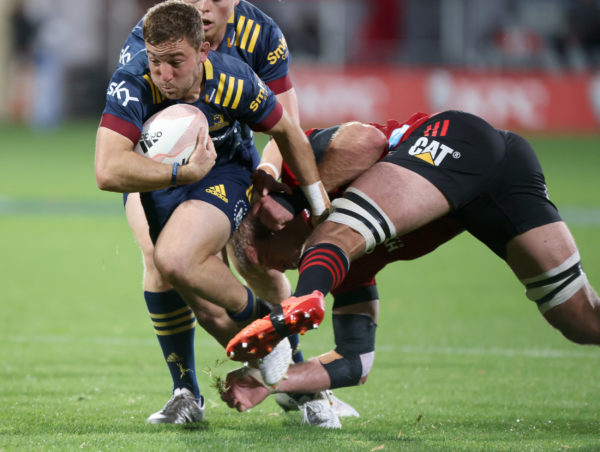 Highlanders flyhalf Mitch Hunt was in good form for his team as they shocked the Crusaders in Super Rugby on Friday. Picture: Peter Meecham/Getty Images

A masterful display from Mitch Hunt took a make-shift Otago Highlanders to a shock 33-12 hiding of the table topping Canterbury Crusaders in Super Rugby Aotearoa in Christchurch on Friday.

The Highlanders bounced back from a week to forget to inflict the first defeat of the year on the Crusaders with three converted tries and four penalties.

Hunt, a former Crusaders flyhalf who moved south to escape the shadow of Richie Mo’unga, engineered an attacking game plan that rattled the defending champions, as well as landing 18 points from the boot.

Mo’unga, and the 11 other internationals who started in the star-studded Crusaders, had a night to forget with a succession of handling errors, misdirected passes and penalties for not releasing in the tackle.

As runaway competition leaders they started as hot favourites against a Highlanders side without six prominent players, including All Black Josh Ioane, who were dropped for breaching what coach Tony Brown called “the team code”.

ALSO READ: All Blacks skipper Sam Cane out for up to six months

The result was a patched-up, but fired up side with nothing to lose and who complemented their rock-solid defence with a smart attack whether running or kicking for territory.

Captain Ash Dixon said it was a “tough week” but they never lost faith in their systems.

“Our execution came off tonight because that’s something that’s been lacking and I’m really proud,” he said of the record victory over their South Island neighbours.

“When you can apply pressure and have the ball in the right areas of the field and come away with points, there was nothing special, it was pretty simple but it was effective.”

Crusaders captain Scott Barrett said there were no excuses for the overwhelming loss.

“They played smart, they put it in behind us and probably made us play a bit in conditions that probably suit running,” he said.

“They put pressure on at the breakdown and they were patient. It hurts, especially at home, so we’ll look hard in the mirror as a team and we have to get better.”

Scrumhalf Folau Fakatava repeatedly won turnover ball allowing the Highlanders to spend most of the first half in Crusaders territory picking up points from three penalties by former Crusader Mitch Hunt who also converted a try by another former Crusader Billy Harmon.

On the stroke of half-time the Crusaders put their first points on the board when Codie Taylor scored handy to the posts with Richie Mo’unga adding the extra points.

The Highlanders continued to capitalise on Crusaders’ errors in the second half with another Hunt penalty and a try to Michael Collins.

When David Havili scored the second Crusaders’ try to narrow the gap to 26-12 with 10 minutes remaining, the Highlanders put the result beyond doubt with a late try to Connor Garden-Bachop.