With BMX Freestyle now an Olympic event, this country's top performers will shift their focus to competing at the international qualifying contests in the future. 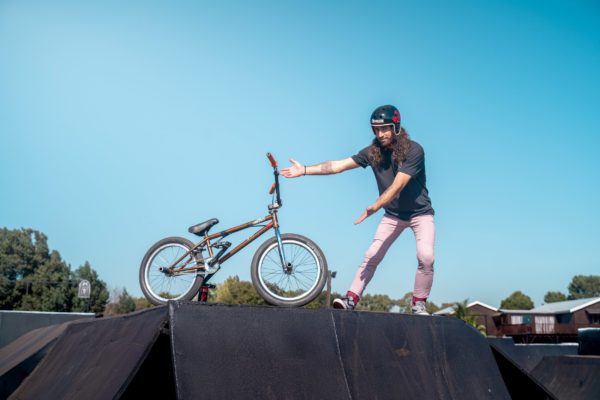 BMX Freestyle performer Vincent Leygonie will be among the favourites at next week's Park Lines tournament in Benoni. Picture: Shawn van Zyl Media

Vincent Leygonie has been riding and competing in BMX Freestyle for the past nine years.

With a background in professional cycling, 23-year-old Leygonie decided to move away from the crazy training schedules and relentless pressure to focus on his passion in BMX, and rapidly progressed to a stage finding himself competing against the best riders in the country.

Always expecting better from himself, Leygonie reflects on winning a stop on the Ramp Rodeo series in 2017 and the Ultimate-X Local Hero award in 2019.

With the announcement of BMX Freestyle being included in the Olympic Games, his focus has now shifted to competing at the international Olympic qualifying contests in the future, to hopefully create the opportunity for himself to represent South Africa at the Games one day.

With the absence of professional BMX Park events being held over the past two years in South Africa, Leygonie is excited about the announcement of the inaugural BMX Park Lines tournament taking place on Saturday 29 May, at the Compound Bikepark in Benoni, Johannesburg.

He can finally get back to what he does best, and that is showcase his skills against the best pro riders from around the country. BMX star Vincent Leygonie is getting ready for a big event in Benoni next week. Picture: Shawn van Zyl Media

“I can see Park Lines becoming a large festival style event, with Action Sports taking place all day and live music in the evening,” said Leygonie. “As well as possibly being a National Championship event where South Africans can start earning UCI points to qualify for the Olympics.”

In full preparation mode, time has been spent on the bike, working on his bag of tricks and making sure he has them dialled in. The next step is to focus on what line he’s going to use in the park and which tricks are going to be executed on which obstacle, all while keeping his mental state in check. Leygonie believes that if your head is in the right space nothing can stop you.

Setting his sights on first place, he admits that there are a few riders that can take the podium spots, but two riders that can top him if they are on it, namely Murray Loubser and Malcolm Peters from Cape Town.

Judges will be looking out for use-of-park, technicality, variation, style, tricks and amplitude to make their selection of riders advancing into the finals, and ultimately the podium. Expect tricks like 360 Down Whips, 540 Combos, Backflips, Flairs, Tailwhips and more, to be in the mix, making for an exciting and closely matched tournament.

When asked about his ultimate competition run, Leygonie states that it will include huge airs with massive Look-backs and Turndowns, to large transfer Tailwhips, some sneaky 360 variations and 540 airs, but most importantly, as long as he is having the most fun while doing it.