Skateboarders set to thrash it out after Olympic ‘boost’ 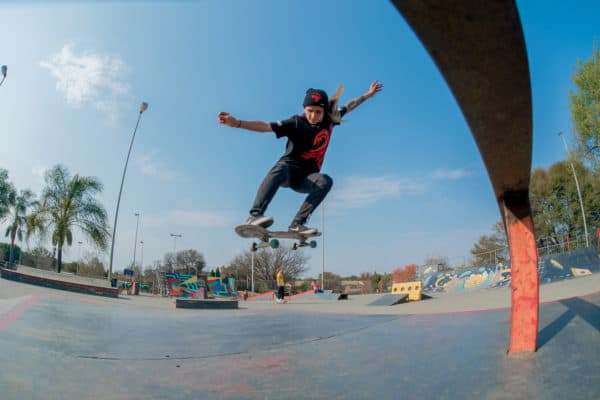 Local star Sharne Jacobs will be looking to shine at the Street Lines tournament in Pretoria next week. Picture: Day Marumo

Hot off the debut of street skateboarding at the Olympic Games, local stars Sharne Jacobs and Sam Molefe are preparing for the up-coming Street Lines Skate Tournament taking place at the Thrashers Skatepark in Pretoria on Saturday, 9 October.

Jacobs’ skating career started as a teenager and has been a big part of her life ever since, an amazing journey with many life lessons learnt along the way.

Her highlights include being able to connect to people through skateboarding, creating lifelong friendships and competing in national competitions.

As the founder of Girls Skate South Africa, her goal is to get more girls into the skateboarding scene.

Hosting workshops for girls at their various skate sessions around the country has grown into something amazing, connecting people and giving girls a sense of community.

When it comes to preparing for contests, Jacobs puts in a lot of practice, while trying not to put too much pressure on herself.

“I have no doubt that it will be a successful event. Hopefully it can take over as the main skate event in the country that everyone wants to be a part of, and ultimately get some international skaters over to compete”.

His skateboarding career has included a fair deal of travelling and allowed him to be with his friends.

He has had a good time on every trip and meeting amazing new people along the way has been a bonus.

On a daily basis Molefe can be found at his local skate park working on tricks, or just cruising around and having a chilled day without any interference.

Regarding the Olympics, he says it’s great to see some of his friends competing on such a huge stage and this has translated into more kids starting to skate and pushing themselves, with a renewed goal of one day competing in the Olympics.

This progression and drive in younger skaters will results in a bright future for the local skate scene.

Molefe is excited about the Street Lines Skate Tournament as there hasn’t been a big competition in Gauteng for some time and it will bring skateboarding enthusiasts of all levels together.

“It’ll be good to see all the young up-and-coming skaters from Johannesburg competing against some of SA’s top skaters. I would like to see more Street Lines contests happening in the future, as this will push skaters to progress,” he said.