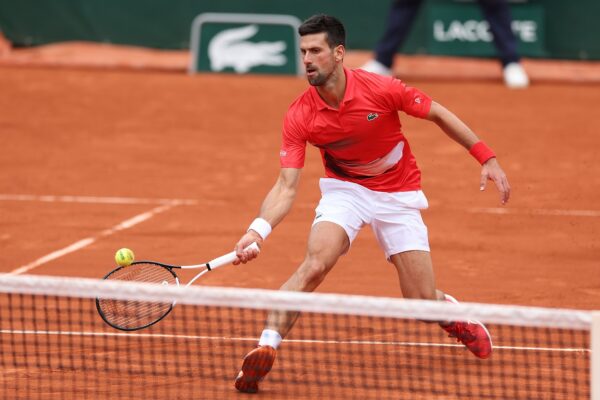 Novak Djokovic during his fourth-round match at the French Open. Picture: Getty Images

“I have a lot of respect for him (Schwartzman). He’s a good person off the court,” said Djokovic who has now beaten Schwartzman seven times in seven meetings.

Djokovic is still to drop a set at Roland Garros after cruising through the first week.

He has also won 22 sets in a row, stretching back to his Italian Open title triumph in Rome earlier this month.

“I’ve made a good start but I have a lot of work to do,” added Djokovic who will face Nadal for the 10th time at Roland Garros and 59th overall if the Spaniard defeats Felix Auger-Aliassime later Sunday.

ALSO READ: It ‘breaks my heart’ to see Becker in prison, says Djokovic

In an interesting twist, Auger-Aliassime has Nadal’s uncle and former long-time coach Toni working with him.

Toni coached his nephew for the best part of three decades during which time Nadal won 16 of his record 21 Slam titles.

When asked if he will divulge to Auger-Aliassime the secret of how to become just the third man to defeat Nadal at Roland Garros, the 61-year-old coach was unequivocal.

“Of course not. I told Felix that my ethics do not allow me to give him advice on beating my nephew. It’s as if I were telling someone how to defeat my own son,” said Toni ahead of his first meeting with Rafael since their split.

Toni said he would not sit in Auger-Aliassime’s player box for the match, taking his place instead in the presidential box on Court Philippe Chatrier.

In the wide open women’s event, which saw nine of the top 10 seeds fall before the second week, Canadian teenager Leylah Fernandez reached the quarter-finals for the first time.

The 19-year-old has made the quarter-finals on the back of an impressive 23 service breaks over four rounds at Roland Garros.

“It was a very complicated match. Amanda is a very good player but I was happy to win in front of you,” said the 2019 junior champion.

She next faces Martina Trevisan for a place in the semi-finals.

The world number 59 from Italy booked her place in the quarter-finals for the second time in three years, edging out Aliaksandra Sasnovich from Belarus 7-6 (12/10), 7-5.

Trevisan enjoyed a surprise run to the quarters as a qualifier in 2020, losing to eventual champion and current world number one Iga Swiatek.

“Paris is a bit like my second home,” said the 28-year-old, who won her maiden WTA title earlier this month in Rabat.

“The atmosphere here is magical and I feel great on the court.”

American teenager Coco Gauff reached the last-eight for the second successive year with a 6-4, 6-0 win over Belgium’s Elise Mertens.

Gauff, 18, will face either US compatriot, and 2018 runner-up, Sloane Stephens or 23rd-seeded Jil Teichmann of Switzerland for a spot in the semi-finals.

Later Sunday, 19-year-old Carlos Alcaraz, the youngest man through to the second week of the French Open since Djokovic 16 years ago, takes on 21st seed Karen Khachanov.

Alcaraz has won 20 of 21 matches on clay this season but needed to save a match point to beat Spanish compatriot Albert Ramos-Vinolas in the second round.

Third seed and 2021 semi-finalist Alexander Zverev plays qualifier Bernabe Zapata Miralles, the 134th-ranked Spaniard who is enjoying his best run at a major.