With support from the race organisers, Lusapho April will attempt to achieve two goals when he returns to the Hannover Marathon in Germany. 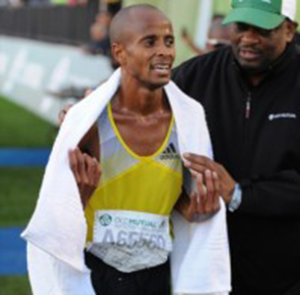 April’s manager, Perry Beningfield, revealed on Thursday he would target his third career victory at the annual race on April 10.

With officials setting up the contest around the Eastern Cape athlete, he would also aim to clock a fast enough time to ensure his place at the Rio Olympics in August.

“Lusapho has decided on a return to Hannover,” Beningfield said.

“We had options – notably Boston – but the combination of a fast course and a great willingness from the organisers to bring him back to Hannover carried the day.”

April is the only South African to have won the Hannover Marathon, achieving the feat in 2011 and 2013. His personal best of 2:08:32, when he won the race for the second time, remains the course record.

While three SA men have already dipped under 2:13:00 in the qualifying race for the Rio Olympics – Stephen Mokoka, Lungile Gonqga and Michael Mazibuko – Mokoka insisted he would focus on the 10 000m at the Rio Games. With the marathon door wide open, April’s management team hoped he would cement his place in the squad with a career best.

“He runs to win, so that is the focus, but the organisers have set the race up for him to get the course record as well,” Beningfield said.

“Hopefully both objectives can be achieved.”

Meanwhile, the majority of South Africa’s elite marathon runners were also gearing up for Olympic qualifying attempts.
Veteran Hendrick Ramaala, aiming to compete at a record fifth Olympics, and three members of his training group were recently named in the line-up for the Mumbai Marathon in India this Sunday.

Gongqa, who was second at the Cape Town Marathon in September in 2:11:59, and Mazibuko, who was third at the same race in 2:12:29, left this week for Mumbai with Ramaala and rising marathon star Xolisa Tyali.

Mokoka’s training partner, Gladwin Mzazi, confirmed he had fully recovered from a calf injury he picked up at the Cape Town race, and he was ready to turn out at the prestigious Dubai Marathon next week.

Jenna Challenor, making her third appearance over the 42km distance after a troubled first two starts, said she would race the Nagoya Women’s Marathon in March.

Holding a personal best of 2:41:44, set on a tough course in poor conditions in Mossel Bay in 2014, Challenor was eager to go quicker, with a competitive race on the cards for the three available women’s spots at the Games.

The early contenders included civil engineer Christine Kalmer, who clocked a personal best of 2:33:43 in November, Mapaseka Makhanya, who set a qualifying time of 2:37:21 in Shanghai a week earlier, and Lebo Phalula, who crossed the line in 2:38:55 on debut in Cape Town.

London Olympian Irvette van Zyl, one of the leading contenders for a place in Rio, was expected to concentrate on a qualifying attempt in the 10 000m later in the season, along with Phalula.

Van Zyl was confirmed in the field earlier this week, however, for the London Marathon in April, with the potential to broaden her chances of competing at the Games.

The race was set to be Van Zyl’s first attempt at the marathon distance since her first child was born in September.

Phalula said she would not race another marathon for a couple of years, regardless of whether she qualified on the track.

The likes of Tanith Maxwell and Rene Kalmer, who joined Van Zyl in the team at the 2012 London Games, as well as Makhanya and Sibusiso Nzima, two of the country’s brightest marathon prospects, had not yet confirmed their participation though all of them were expected to turn out in international marathons over the next few months.