It was not easy to pinpoint the exact reasons for the poor crowd attendance at the Wanderers this week, according to Cricket South Africa (CSA), but the federation believed there were a number of factors that should be considered. 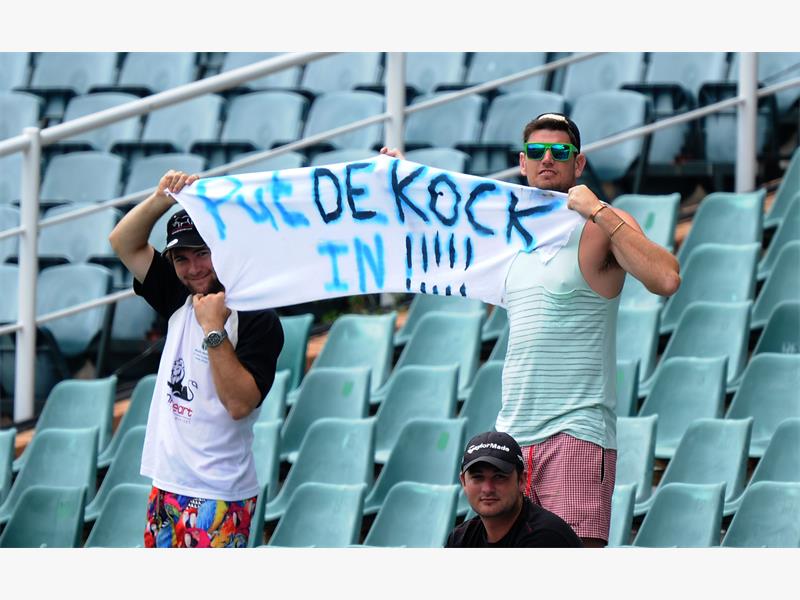 South African cricket supporters hold up a banner in support of cricketer Quintin de Kock on the third day of the first test between South African and India in Johannesburg at the Wanderers Stadium on December 20, 2013. AFP PHOTO/ Str

Altaaf Kazi, the CSA spokesman, said yesterday the governing body had followed standard channels in attracting spectators to the game.

There were around 8 500 people on Wednesday’s opening day of the first Test between SA and India, while 5 300 fans turned up in overcast conditions on Thursday.

The stands were again left mostly abandoned at the 34 000 capacity venue yesterday morning, but the crowd gradually trickled in throughout the day.

“We have marketed this match as we would any other Test match,” Kazi said.

“It’s difficult to determine the reasons but there are a number of factors that could have an effect.”

Kazi pointed out that Tests were usually not played at the Wanderers during the festive season.

Centurion has been the preferred choice for matches in mid-December in recent years, with many Johannesburg residents on holiday at the coast.

The Wanderers Test had initially been scheduled to be played in mid-January, but was brought forward after the Board of Control for Cricket in India (BCCI) demanded a reduced tour schedule.

The BCCI had threatened to cancel the entire tour after Haroon Lorgat was appointed CSA chief executive in July, as he had clashed with the Indian governing body during his tenure at the International Cricket Council.

The tour was only confirmed after CSA agreed that Lorgat would have no involvement in the relationship between the two national bodies.

Kazi would not comment on a possible boycott by fans due to the BCCI’s interference, but he confirmed the ODI at the Wanderers earlier this month had been sold out.

“We’re expecting the attendance to pick up over the weekend,” he said.

“The turnout should also be better at the second Test in Durban next week.”

WATCH: Couple conquers flood by sailing to wedding in giant cooking pot
1 day ago
1 day ago

WATCH: Couple conquers flood by sailing to wedding in giant cooking pot
1 day ago
1 day ago