Proteas denied by absence of DRS

South Africa were left frustrated after a crucial morning session on Sunday's final day of the first Test against India at the Wanderers, after a poor decision left them stranded in their world record chase against India. 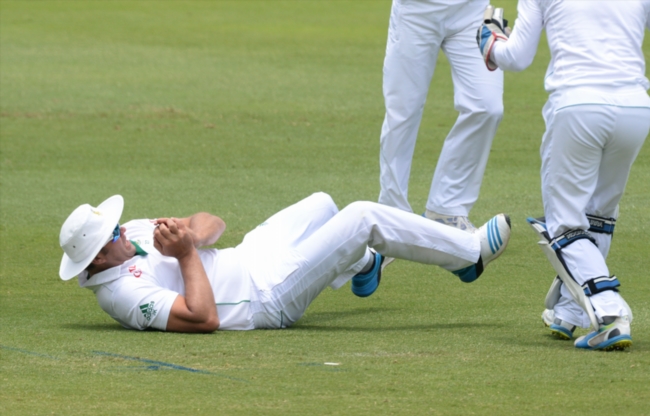 FILE PICTURE: Jacques Kallis of South Africa takes the catch in the slips for Vernon Philander's 100 test wicket during day 3 of the 1st Test match between South Africa and India at Bidvest Wanderers Stadium on December 20, 2013 in Johannesburg, South Africa. (Photo by Duif du Toit/Gallo Images)

A rampant Jacques Kallis was denied by the Board of Control for Cricket in India’s (BCCI) refusal to adopt the widely accepted umpire decision review system (DRS), pushing the hosts further on the back foot.

The Proteas resumed at 138/2 in the morning session, still needing 320 runs to win, and paceman Mohammed Shami struck in the fifth over of the day when Alviro Petersen clipped the ball onto his inside stump for a well played 76 runs off 162 balls.

Hashim Amla was removed by Mohammed Shami six overs later for just four runs as the tourists piled on the pressure.

Kallis, however, played an unusually aggressive innings, racing along at a run a ball as he made a determined attempt to wrest control from the tourists.

The veteran all-rounder was denied midway through the first innings when he got a thick inside edge onto his pad and was given out lbw.

While replays showed he had got an edge, with India refusing to accept the DRS system, Kallis took a walk for 34 off 37 deliveries, with Khan taking his 300th Test wicket in controversial circumstances.