Friday the 13th haunts the Proteas and Sri Lankan batters

After a run-filled first day, a spicy Wanderers pitch awakens to cause all sort of difficulties for the respective batting orders. 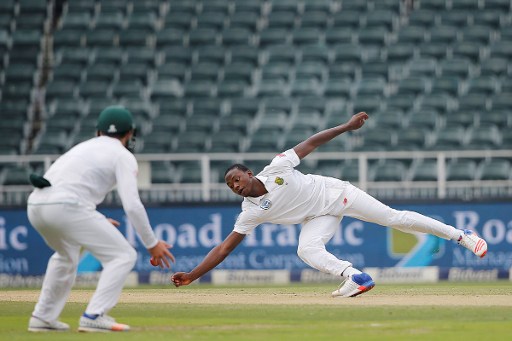 You can't keep Kagiso Rabada out of a game for too long. Photo: Marco Longari/AFP.

It wasn’t lost on people at the Wanderers that the second day of the third Test between the Proteas and Sri Lanka was played on Friday, the 13th.

And in this case, it spelled trouble for the batsmen.

When South Africa stacked a formidable 338/3 at the end of day one, many were wondering where was the spicy Wanderers pitch everyone was talking about in the build-up.

As it turned out, it was only a day late.

By the time bad light stopped play prematurely, Sri Lanka had slumped to 80/4 in reply to the Proteas being bowled out for 426.

The home side lost their last seven wickets for just 89 runs.

The indomitable bowling pair of Kagiso Rabada and Vernon Philander though quickly made the Proteas forget their batting troubles.

The stocky seamer stuck to his line outside off, while his young teammate bullied, especially when he bounced out Kusal Mendis (41).

Sri Lanka simply haven’t had answers when it comes to these two.

Earlier, the visitors also had some smiling after making far better use of the surface.

Despite their low morale and mauling on the first day, Sri Lanka’s pace attack showed admirable control and hit their straps unexpectedly well.

The tone was set early on as the dependable Suranga Lakmal kept things quiet, before 19-year-old Lahiru Kumara (2/104) and a brilliant Nuwan Pradeep (4/73) exploited favourable conditions.

Their lengths in particular were excellent as a host of Protea batters simply didn’t cope.

Pradeep’s nagging line was too good for Amla as well as Faf du Plessis (16) and Vernon Philander (0).

Yet his wicket of Temba Bavuma was a gift.

The diminutive middle-order batter fished rashly outside off-stump to continue his poor form.

Bavuma has been prone to poor shots in this series and will need to tighten up if he wants a prosperous Test career.

He has a chance to regain confidence in franchise cricket after this match and needs to use it before the tour of New Zealand next month.

Quinton de Kock (34) and Wayne Parnell (23) propped up the South African total with some attacking if unconvincing strokeplay, taking them past 400.