Lungi Ngidi: The Proteas can throw me in at the deep end

The 20-year-old rookie fast bowler from the Titans looks more than comfortable being in line for an unexpected international debut. 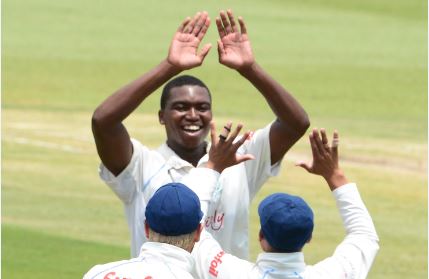 And if anyone doubts that, they merely need to hear what the 20-year-old quick from the Titans did when Linda Zondi, the national selection convenor, gave him the news.

“We were in Bloemfontein for a four-day game that got rained out. I was under the covers in our hotel room when I got the call,” said Ngidi on Tuesday afternoon at the Wanderers, minutes before his first training session with the national side.

“I didn’t quite believe what I was hearing at first. In fact, I checked the call logs on my phone a few times, just to make sure it actually happened.

“Linda told me not to tell anyone before the squad gets announced, so I was just sitting around with a big smile. My roommate, Gregory (Mahlokwana) asked me why I was smiling but I told him: ‘Nah, nothing’. After all, I was asked not to say anything.”

Jokes aside, Ngidi truly does believe he’s been given this early opportunity because he heeds the advice of his coaches.

“The journey has been amazing, things unfolded really quickly,” he said.

“I put in a few good performances this year but my coaches reminded me that nothing is a better recipe for success than consistency. That’s what I’ve tried to. I do things one step at a time.”

One of the youngster’s greatest attributes is his ability to thrive being thrown at the deep end.

“(Former Proteas assistant) Rob Walter was the guy that gave me my big break. I was playing Varsity Cricket with Tuks and he saw me. It really kick-started things for me,” he said.

Naturally, the step up to international cricket can’t really be compared to a quick franchise selection but the basic attitude remains.

“A lot of my Titans teammates are Proteas, so I have a pretty good idea of what’s required and how to go about it. Sometimes it’s better to be fast-tracked. I respond to it because I like to learn.”