It’s a crazy world! Kagiso Rabada is a millionaire … at 21

The Proteas' brilliant young strike bowler fetches a massive bid at this year's IPL auction after opting to sit out last year. 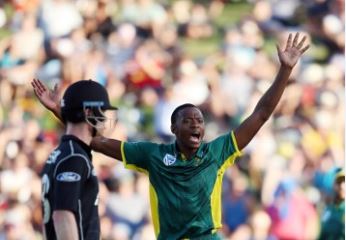 Kagiso Rabada is a multi-millionaire at 21.

It’s a crazy thought but it’s a reality.

He’ll play for the Delhi Daredevils in this season’s campaign and has no reason not to feel loved in the glitzy tournament.

Rabada had a base price of R1.96 million – the minimum amount a team had to bid when his name was put up – and eventually had Delhi and the Kings XI Punjab fighting for his signature.

It will be the brilliant quick’s, who bowled a good spell in Sunday’s first ODI against New Zealand, maiden campaign in India.

He chose not to play in the tournament last year and rather gained experience in the English county championship with Kent.

But the show was stolen by England all-rounder Ben Stokes, who went to Pune on the back of a massive R26.4 million bid.

The 25-year-old fetched seven times the amount of England one-day captain Eoin Morgan, who was sold for approximately R4 million to the Kings XI.

Stokes attracted multiple bids from rival franchises before the gavel came finally down after Pune put in their winning bid.

It shattered the previous record paid for a foreign star, which was set in 2014 when Delhi shelled out about R18 million for Kevin Pietersen.

But it’s still short of the R31 million that Bangalore paid for Indian veteran Yuvraj Singh in 2015.