Proteas bow knee to the brilliance of Martin Guptill

The New Zealand opener smashes a brilliant, whirlwind century to force the one-day series into a decider on Saturday. 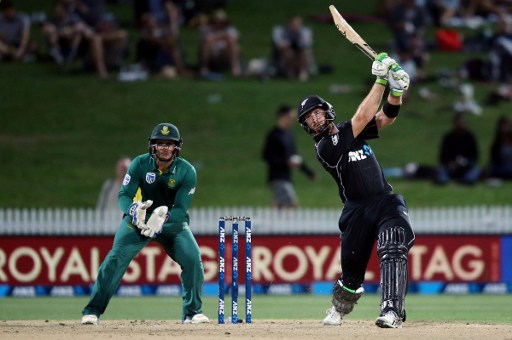 The Proteas will once again have to clinch a one-day series in the final game after they ran into buffers against Martin Guptill in Hamilton on Wednesday.

The New Zealand opener, who had missed the first three matches of the series, made a triumphant return as he smashed an unbeaten 180 out of a total of 280/3 to guide the home side to a win by seven wickets.

South Africa will be annoyed that they missed out on the opportunity to clinch the series but there’s no reason for them to be disheartened.

Firstly, the Proteas have a decent track record of winning deciders in one-day series.

The most recent examples of this was last year’s win over England, when they recovered from 2-0 down to prevail by 3-2, and late 2015’s historic series win in India.

And secondly, the South African bowling attack (and probably the whole squad) needed this wake-up call.

It’s been a fairly easy few month for this limited overs side and with the ICC Champions Trophy looming, they need to find ways to handle pressure situations.

It was a test they pretty much failed in this game.

On a small field, Guptill was irresistible in smashing 15 fours and 11 sixes in his 138-ball thriller.

“We needed to get Martin out, but we just could not create enough opportunities to get him out,” said AB de Villiers, the Proteas skipper, afterwards.

“It was a fantastic innings.”

The debate over whether South Africa need an extra strike bowler to support Kagiso Rabada (1/41) will also flame up now.

Can this attack flourish with three bowling all-rounders?

Ironically, it was the all-rounders that saved the Proteas’ batting effort.

The middle-order collapsed again after Hashim Amla (40) and Faf du Plessis (67) had given them a good start.

At 158/6, the touring side experienced a crisis before De Villiers showed his worth with a splendid, unbeaten 72 off just 59 deliveries.

He might not be scoring centuries at the moment but South Africa’s batting kingpin is nonetheless as valuable as ever.

Chris Morris assisted him with a decent 27 before Wayne Parnell smashed 29 off 12 to lift them to 279/8.

It’s doubtful whether it would’ve been enough anyway, even if Guptill hadn’t been in such a devastating mood.