Faf is convinced the Proteas need an under-cooked Morne Morkel

South Africa's Test captain has no problem defending his decision to back his veteran quick before the first Test against New Zealand. 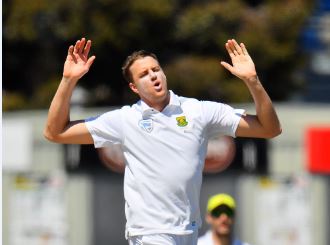 Morne Morkel will play his first Test in more than a year. Photo: Daniel Kalisz/Getty Images.

There’s nothing anyone can do to convince Faf du Plessis that Morne Morkel isn’t ready for Test cricket again.

The Proteas skipper on Tuesday confirmed the towering 32-year-old quick will play in the first Test against New Zealand starting Wednesday in Dunedin.

“He looks good. If he is not going to be able play now, then we will never know if we don’t take the chance. He is a fantastic bowler,” said Du Plessis.

“I have said to him over the last six months that every time he has bowled in the nets, it felt to me like he was bowling at his best. His consistency is really good. It’s just an opportunity we have to take as a team and see where Morne is with his back.”

It’s reassuring that Du Plessis is so confident because some aren’t.

Also read: Dean Elgar is happy he won’t be bitten by the two ‘old dogs’

Morkel hasn’t played in the five-day format since January 2016.

In fact, his last international game was last June’s one-day tour of the Caribbean.

Since recovering from a back injury that kept him on the sidelines for seven months, Morkel has bowled 16.5 overs.

If ever there was a man picked on reputation and merely his desire to play again, it’s Morkel.

He doesn’t have any recent stats to back him up.

It’s all very hard on the promising Duanne Olivier, the Knights quick who made a good Test debut against Sri Lanka two months ago.

Du Plessis, however, is having none of it.

When South Africa plays against top orders that have three left-handers among the first five batters, you want to play Morkel.

“That’s one of the reasons he got the nod ahead of Duanne. You’ve got to make sure you pick your strongest team for the guys you are playing against,” said Du Plessis.

“When he delivers a ball, the angle he releases from almost points to first slip. It goes either into right-handers or away from left-handers and obviously bounce is a huge factor. He is terrible to face in the nets as a right-hander because you always feel like you can get hit in the ribs and obviously it’s the opposite to lefties, it goes away.”

“Duanne is going to play a huge role for us going forward. It’s nice to have the opportunity to have him with us this whole series. He can be a factor to still challenge for a spot in our strongest XI,” said Du Plessis.