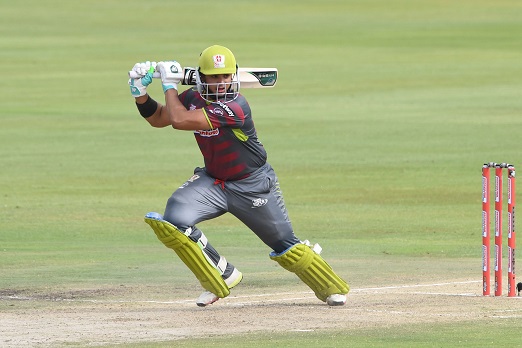 Gihahn Cloete of the Tshwane Spartans during the Mzansi Super League match between Tshwane Spartans and Paarl Rocks at SuperSport Park on December 05, 2018 in Pretoria, South Africa. (Photo by Lee Warren/Gallo Images)

The Tshwane Spartans kept their playoff hopes in the Mzansi Super League alive with a tense four-wicket victory over the Paarl Rocks in Centurion on Wednesday.

However, this performance was indicative of the jittery batting that have dogged the home side in this tournament as they made things unduly difficult for themselves after being set a target of just 122.

On a slow pitch, there was some magnificent spin bowling on show – the Spartans’ Shaun von Berg (3/27) and Rocks’ Tabraiz Shamsi (3/18) were standouts – but also some indifferent batting.

Andrea Agathangelou (23), a tournament replacement for the injured Theunis de Bruyn, tried a ramp shot off a David Wiese slower ball, while England ODI captain, Eoin Morgan, had an inglorious debut for the hosts in playing an ill-judged reverse sweep off Shamsi.

It threatened to undo the Spartans’ good bowling effort before the calm Rob Frylinck kept his head with a match-winning unbeaten 22.

Rocks skipper Faf du Plessis was a class apart, caressing his way to a fine 38 off 19 balls. Five fours and two sixes flew off his blade on a surface where no-one else could find fluency. It was a massive letdown when he found AB de Villiers at cover off a full-blooded drive.

Shamsi was outstanding, mixing guile with accuracy. His variations had various batters baffled.

While Du Plessis’ wicket was a key one, it was probably young Lutho Sipamla – who claimed a career-best 3/18 – that struck the crucial blow in landing West Indian Dwayne Bravo’s scalp. The experienced all-rounder had taken the fight to the Spartans bowlers, hitting three sixes in a 14-ball 25 at a time when other teams might’ve been more cautious. Nonetheless, it seemed to be paying off until he sliced the 20-year-old seamer in the air. The pendulum had swung again.