WATCH: Anrich Nortje goes from hero to (a bit of a) zero

But the new Proteas quick is certainly making his mark and learning all the way. 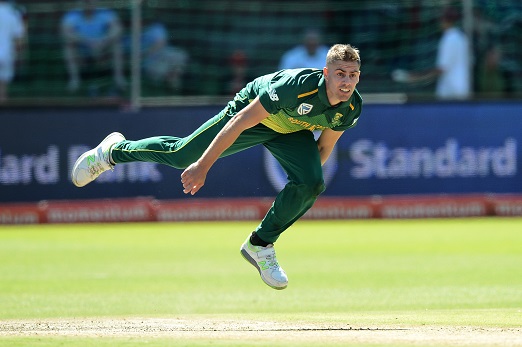 Anrich Nortje is set to play a big part with the ball against England over the course of the T20 series, starting on Friday. Picture: Getty Images

Anrich Nortje might’ve been the Proteas’ most successful bowler in the six-wicket win over Sri Lanka in Port Elizabeth on Wednesday, but he wouldn’t want to relive the last two overs of his spell.

The 25-year-old quick from the Warriors delivered a quick and potent first spell, utilising some extra bounce to claim figures of 3/19 in his first six overs.

By all accounts, his maiden international at his homeground was going swimmingly.

With Sri Lanka reduced to 131/9, home skipper Faf du Plessis decided to bring the lanky quick back into the attack to finish things off.

But neither Nortje nor his teammates foresaw what Isuru Udana, the visitors’ No 9 batsman, would do to him.

Udana smashed him for three consecutive sixes in his seventh over, which eventually ended up costing 23 runs.

Kept in the attack for another over, Nortje fetched another 15 runs, ruining his stellar first spell.

Yet you won’t see Nortje moping around after Udana’s stunning assault, he’s considering it nothing more than a learning curve.

“I spoke to Faf and a few guys afterwards,” he said.

“I just wanted to get their advice on what might be the right plan next time. I think I may have been a little bit too straight. Obviously everyone saw that it didn’t work. I was backing myself the whole time, but maybe I just had the wrong plan.”

What is undeniable though is that Nortje has certainly made an early mark at the highest level.

He recovered well on debut at the Wanderers; set up Sri Lanka’s batting collapse in Centurion and still managed career-best figures in the Bay.

Some might even argue he’s a potential trump card for World Cup selection simply because he’s still not particularly well-known.

But Nortje isn’t thinking about that.

“It’s difficult to say where this performance puts me in the broader picture. It’s just a great opportunity every time for me to play,” he said.

“What happens after that, I can’t control. I just want to go out and give it my best shot. It was nice to be at home. I enjoyed the atmosphere. I would’ve love to finish the last two overs on a high note, but it’s a learning curve.”