There were also strong performances by the spin duo of Tabraiz Shamsi - again - and Bjorn Fortuin. 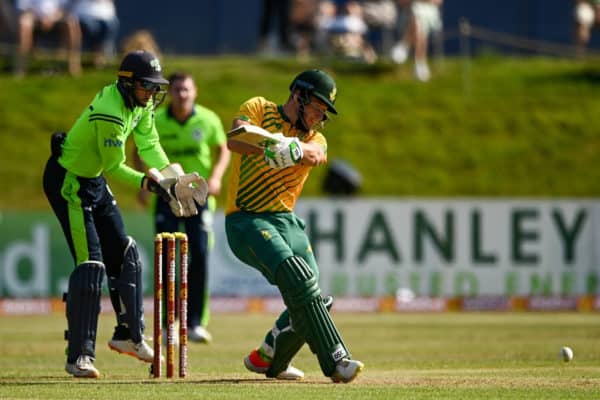 Proteas batsman David Miller was in top form on Thursday, helping the side to a good total, which proved a winning score in the second T20 game against Ireland. Picture: Harry Murphy/Gallo Images

David Miller put his foot on the pedal in spectacular fashion at the end of his innings, after the wheels had fallen off the Proteas top-order, leading South Africa to a 42-run win over Ireland in the second T20 International at Stormont in Belfast on Thursday evening, given them an unassailable 2-0 lead in the three-match series.

Paul Stirling’s part-time off-spin was the vehicle for Ireland to make a dream start after they lost the toss and had to bowl first, the burly opening batsman having both Temba Bavuma and Janneman Malan caught at backward point for ducks in the first over.

South Africa were three down in the fourth over when Aiden Markram, driving loosely, was bowled by Mark Adair for eight, and when Quinton de Kock (27 off 20) was adjudged to be lbw to off-spinner Simi Singh to the first ball after the powerplay, the Proteas were in desperate trouble on 38 for four.

ALSO READ: Proteas T20 team: How Markram is adapting to the middle order

That’s when Miller came to the crease and South Africa were driven to their total of 159 for seven by his fabulous 75 not out off 44 balls. Wiaan Mulder helped his experienced partner to break the cycle of wickets as he contributed an impressive 36 off 26 balls as they added 58 off 43 deliveries for the sixth wicket.

South Africa went into the final over on a moderate 135 for seven, but Miller finished the innings in magnificent style, hitting left-armer Josh Little for four sixes and turning down singles on the other two deliveries.

Left-arm spinner Bjorn Fortuin then removed veteran Kevin O’Brien in the first over of Ireland’s innnings, for his second successive duck, and left-arm seamer Beuran Hendricks had Andy Balbirnie caught behind for six inside the powerplay.

The middle overs were once again a time of celebration for superstar wristspinner Tabraiz Shamsi as he removed the dangerous duo of Paul Stiring (19) and birthday boy George Dockrell (20) in his first two overs. In between, part-time off-spinner Markram dismissed Harry Tector  as Fortuin plucked a low catch diving forward at extra over.

Ireland were eventually all out for 117 in the last over, with Fortuin finishing with a career-best three for 16 in his four overs, which included a maiden, while Shamsi posted the outstanding figures of three for 14.