Bavuma, Boucher say what Proteas need to be the ‘finished product’

"We have 70-80% of our World Cup squad," said the skipper following the series against the West Indies and Ireland. 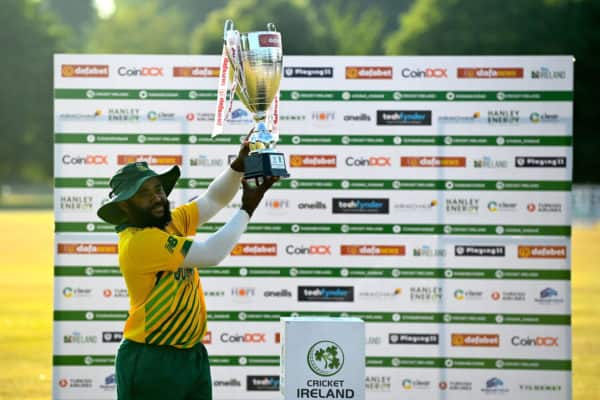 South Africa captain Temba Bavuma, with the trophy for winning the T20 series against Ireland, believes much was learnt in the series against the West Indies and Ireland. Picture: David Fitzgerald/Gallo Images

Proteas captain Temba Bavuma said although his team are only 75-80% of where they need to be for the T20 World Cup, it is a positive that they are still winning series as they look to sort out their best squad for the showpiece event in the United Arab Emirates in October.

South Africa have now won back-to-back T20 series in the West Indies and Ireland and they used 18 different players in doing that.

“It’s a good sign for us as a team that we have not played our best cricket but we have still managed to win. Winning becomes a habit and we can take a lot of confidence after being battered a bit by being on the losing side for a while. We must not downplay the magnitude of the number of steps we have taken,” Bavuma said.

“And we have a clearer understanding of the guys to take forward and their roles. We have 70-80% of our World Cup squad and we still have to go to Sri Lanka and see who can dominate in spin-friendly conditions.

“We’re definitely not the finished product, we’re playing at 75-80% and there are areas to iron out, especially in the batting.”

Playing Sri Lanka on the subcontinent will be good preparation for the World Cup, with conditions expected to be similar. It is obviously going to be difficult at this late stage, in the South African off-season, for new players to be introduced to the Proteas squad, but coach Mark Boucher hinted that all-rounder Dwaine Pretorius could return.

The 32-year-old missed the home T20s against Pakistan due to injury and then tested positive for Covid before the West Indies tour, from which the Proteas flew directly to Ireland to quarantine.

“There are still one or two positions we need to look at before the World Cup. We wanted to give Janneman Malan a go in the top-order because he was in such good form in the ODIs, but it didn’t quite work out,” Boucher said.

“We also have Dwaine Pretorius to come back. We haven’t really played an all-rounder as the sixth bowling option, but I think we will have that covered.

“We need to look at the conditions and what we need bowling-wise at the World Cup.

“George Linde bowled well, but unfortunately he was a bit short of runs. Bjorn Fortuin has not had a lot of cricket, so I was very happy with the way he performed. He’s a tough character, he wants the ball. We tried to mix up selection a bit to give guys opportunity.”