Despite a good bowling effort, and a quality showing in the field, the South Africans didn't score enough runs. 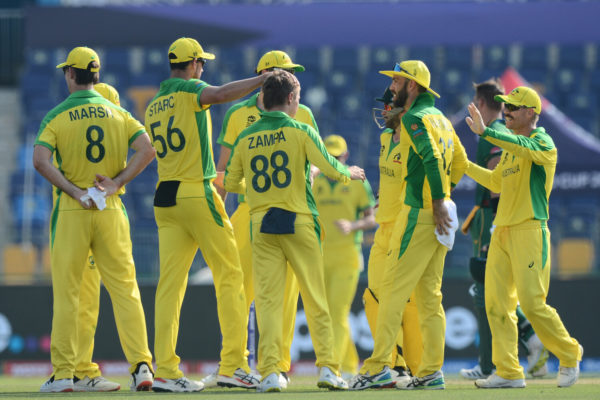 The Proteas have been swearing blind that they will give their all in the T20 World Cup and they certainly did in the field after their batting failed, but it was still not enough to deny Australia victory in the opening match in Abu Dhabi on Saturday.

Having posted just 118 for nine with the bat, South Africa made Australia sweat as they reached their target with five wickets down and only two balls remaining.

Anrich Nortje, save for a short penultimate delivery that Marcus Stoinis swatted away for a crucial boundary in the 19th over, was outstanding as he took two for 21 in his four overs.

The four other South African bowlers all backed him superbly, but Stoinis (24* off 16) and Matthew Wade (15* off 10) added 40 off 29 deliveries to see Australia home and fend off a wobble when they lost two wickets for one run in the 15th and 16th overs.

Steven Smith top-scored for Australia with 35 off 34 balls before he fell to a wonderful running boundary catch by Aiden Markram off Nortje.

ALSO READ: The other side: More details revealed at Cricket SA hearings

South Africa were sent in to bat and Temba Bavuma made a great start by driving Mitchell Starc through the covers for two boundaries in the first over.

But Bavuma then hung back in his crease to off-spinner Glenn Maxwell in the second over and was bowled for 12 and Josh Hazlewood (4-1-19-2) then struck two major blows by having Rassie van der Dussen caught behind with his first ball and then bowling Quinton de Kock in his next over.

De Kock made just seven and tried to paddle the paceman fine, but edged the ball on to his thigh pad and then it bounced on to his stumps, with the batsman unaware where it was and unable to knock it away.

From 23 for three, the Proteas were indebted to Markram for his 40 off 36 balls, putting away boundary chances with ease, that gave them an almost defendable total.

Heinrich Klaasen (13) and David Miller (16) hung around for a bit, and Kagiso Rabada landed a couple of good blows at the death in his 19 not out.