Proteas coast to victory against India

The Proteas steamrolled India on Thursday to take an early 1-0 lead in the three-match series with a crushing 141-run win in the first ODI at the Wanderers. 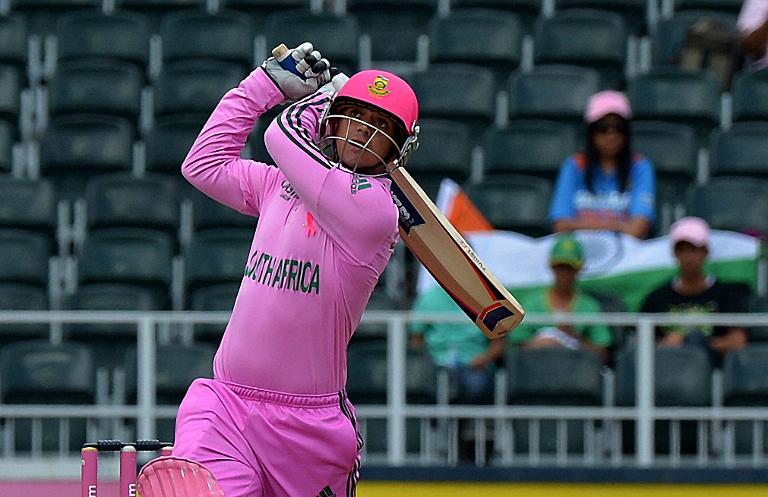 Quinton de Kock makes his 100th run during the first one-day Internationals (ODI) match between South Africa and India at the Wanderers Stadium in Johannesburg, on December 5, 2013

Dale Steyn spearheaded the South African pace attack with a clinical return of 3/25 as the tourists, chasing a target of 359 runs, were bowled out for 217.

Fellow seamer Ryan McLaren also bagged three wickets, though he was not as miserly as Steyn, returning 3/49.

The Indian top order never really got going, and while captain Mahendra Singh Dhoni put up a fight with a consolation half-century, making 65 runs at a little more than a run a ball, the tourists were completely outplayed.

Earlier, Quinton de Kock smashed his second career ton, with South Africa racing to an impressive 358/4 after they lost the toss and were sent in to bat.

De Kock, playing his 14th ODI, made 135 runs off 121 balls, with 18 fours and three sixes, before he was caught and bowled by part-timer Virat Kohli in the 42nd over.

The 24-year-old left-hander was well supported by fellow opener Hashim Amla, who contributed 65 in a 152-run stand for the first wicket.

After De Kock was removed, Proteas captain AB de Villiers, who hit a quickfire 77 off 47 deliveries, and JP Duminy, who smashed an unbeaten 59 from 29, carried them to a huge total.

Seamer Mohammed Shami led the touring side’s bowling attack, taking 3/68, but they had no real answer for the explosive South African batsmen.

De Kock was named ‘Man of the Match’

“I didn’t expect this to happen, so I’m just happy with what I’ve done and hoping to carry on,” De Kock said afterwards.

Relive the game via our Live Match Feed