Leading the way in Hawaii is Australian Cameron Smith, with Jon Rahm one shot back. 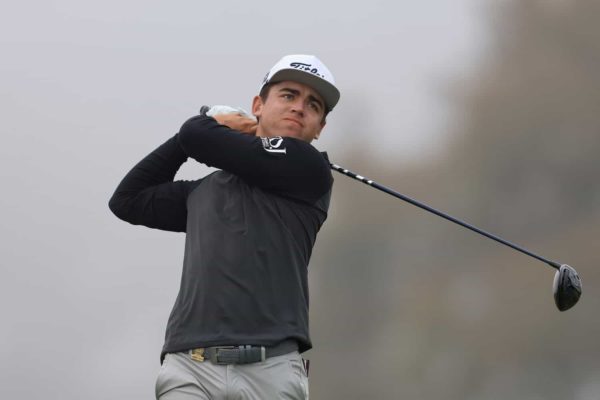 Garrick Higgo of South Africa is in good position on the leaderboard after the first round of the Tournament off Champions in Hawaii. Picture: Sean M Haffey/Getty Images

Cameron Smith rolled in two long eagle putts on the way to an eight-under par 65 and a one-shot lead over world number one Jon Rahm and two others in the US PGA Tour Tournament of Champions on Thursday.

Australia’s Smith shook off a slow start to set the pace on the par-73 Plantation Course at Kapalua in Hawaii, but he had little breathing room in the elite event for last season’s winners.

Spain’s Rahm had seven birdies without a bogey in his 66 and was joined at seven-under by FedEx Cup champion Patrick Cantlay and fellow American Daniel Berger.

“I started off pretty terribly, to be honest,” said Smith, who bogeyed the par-three second hole.

He bounced back with a birdie at the third, then drained a 44-foot eagle putt at the fifth and birdied the ninth to make the turn three-under.

Smith caught fire coming in picking up five strokes in four holes with birdies at 13, 14 and 16 sandwiched around an eagle at 15, where he rolled in a 37-foot putt.

“I just needed those two eagles to get a really low one happening,” Smith said. “Obviously two really long putts and (I was) probably quite fortunate that they went in, but they went in.”

Rahm, whose 2021 season included a maiden major victory at the US Open and PGA Player of the Year honors, birdied the par-five fifth, then picked up strokes at the sixth and seventh — where he made a 24-foot putt.

He gave himself a two-footer for birdie at 13, then picked up strokes at 14 and 16 before two-putting for birdie from 91 feet at the par-five 18th.

“It’s always good to come out and start the year off the right way,” said Rahm, who like many in the first US PGA Tour event of 2022 has taken some time off in recent weeks.

“I mean, you can always expect a little bit of rust. But, again, I took time off, but I wasn’t on the couch, right, doing nothing. I was still working out. I was still practicing as if I was still in the season. I took maybe three weeks off of golf, which were very needed. But even though I was home, I was practicing.”

Cantlay surged into his share of second, picking up six shots in the space of five holes from the 13th through the 17th.

That included four birdies and his 36-foot eagle at the 15th. But he was unable to take advantage of the par-five finishing hole.

“I think that stretch of the golf course in general is the most scorable part,” Cantlay said. “Then I hit a lot of quality shots and it had been a little time coming, it felt, because I made so many pars on the first 12 holes or so.”

British Open champion Collin Morikawa, who can overtake Rahm for the number one ranking with a victory this week, was among five players on 68, a group that also included four-time major champion Brooks Koepka, Joel Dahmen, Talor Gooch and Garrick Higgo.

Masters champion Hideki Matsuyama of Japan and Olympic gold medallist Xander Schauffele were in a big group on 69.

The other major winner of 2021, PGA Champion Phil Mickelson, fired a two-under 71 in his first appearance in the event in 21 years.

“It’s a beautiful place and every hole has such scenery, and so forth, but it is a hard golf course to walk,” the 51-year-old said. “I’m hurting.”