Churchill can repel all comers in Juddmonte

But preference is for Cliffs Of Moher’s stablemate Churchill, the dual Guineas winner from Aidan O’Brien’s yard. 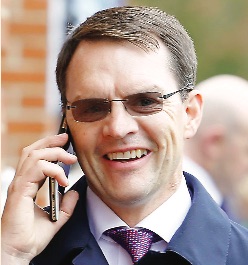 Churchill can show his true colours today in what could be an epic renewal of the Juddmonte International Stakes at York.

Anyone with even a passing interest in the sport will be hoping for a truly-run encounter as some of Flat racing’s biggest names do battle on the Knavesmire.

Barney Roy and Ulysses will rightly have droves of supporters, while Derby runner-up Cliffs Of Moher looked unlucky in the Eclipse at Sandown.

But preference is for Cliffs Of Moher’s stablemate Churchill, the dual Guineas winner from Aidan O’Brien’s yard.

Despite having won two Classics and four Group 1s, many are left cold by the Galileo colt.

There are several reasons for this, with perhaps the most pertinent being he does not do anything at all flashy on a racecourse.

Indeed, his critics felt vindicated at Royal Ascot when he finished a laboured fourth to Barney Roy in the St James’s Palace Stakes.

That was his first reverse since his debut at The Curragh in May 2016 and was pre y painful to watch as Churchill simply never picked up when asked by Ryan Moore.

Nothing came to light in the post-mortem, but there were one or two very funny results at the Royal meeting as several big horses felt the pinch in the baking-hot conditions.

Either way, Churchill in no way showed his real worth at As- cot and is a much, much better horse than that.

O’Brien was wise to withdraw him in a Goodwood bog for the Sussex Stakes and was very quick to pinpoint the Juddmonte as an alternative line of attack.

At his best, he has a lovely, relaxed way of going about his business, which goes a long way to explaining why his trainer is convinced he will get this 2000m trip. This is a very important day for Churchill. O’Brien seldom falters on very important days.


It will be great to see Cracksman back in action in the Betway Great Voltigeur Stakes – and he should win. This Frankel colt is a slowmaturing horse, having had just four runs in his life, yet he was still good enough to finish third in the Derby and second in the Irish equivalent.

John Gosden is already star- gazing towards how he might develop as a four-year-old, but the expectancy is he will be a lot straighter at York than at Epsom and The Curragh.

Should that be the case, Cracksman could provide the big meeting with one of its most upliftng narratives.


Mark Johnson loves Dee Ex Bee, who should have enough about him to take the Tattersalls Acomb Stakes.

This young son of Farhh won on his debut at Goodwood in spite of the so ground and is likely to be even smarter on a sounder surface. Tim Easterby has had a golden summer and can be trusted to get Orion’s Bow back in front in the Symphony Group Handicap.

The six-year-old chestnut is a seriously quick handicapper and probably not far off Group-race quality.

Orion’s Bow has not, however, had the rub of the green this year, but all that can change at York in a race in which many of the protagonists can be separated by the width of a cigarette paper.- Press Association