Robin and his brother Des are best known for having bred champion racehorse Politician, winner of both the Durban July and Cape Met. 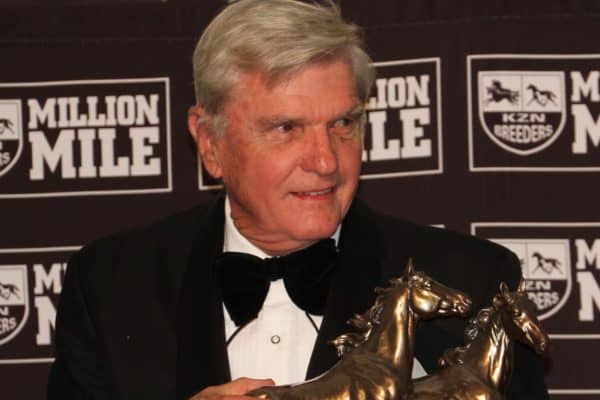 Robin Scott, one of the most successful and celebrated thoroughbred breeders in South Africa, has died at the age of 86 following a long illness.

Robin and his brother Des – as Scott Brothers – are best known for having bred champion racehorse Politician, winner of both the Durban July and Cape Met among his 11 Grade 1 triumphs.

Their Highdown Stud at Nottingham Road also produced the likes of globe-trotting Grade 1 winner Gypsy’s Warning and record money-winner The Sheik, among hundreds of other top horses.

The Scotts were also avid racehorse owners whose silks of black, white Maltese cross and red sleeves were famous on courses around the country – many of them trained in Cape Town by Terrence Millard. Great runners included Spanish Pool, Argentinian-bred July hero Ilustrador and mighty British mare Devon Air, who won three Grade 1s back-to-back – the Republic Day, the July and the Gold Cup.

Before catching the racing bug, the Scott brothers were highly successful in the retail world with the family shoe-shop chain Scotts.

Along with a third brother, farmer Neville, the Scotts established Highdown Stud near Nottingham Road in 1967 – at a time when Natal breeders were seen as poor relations to the mighty farms of the Cape and Karoo.

Scott Brothers, along with the likes of Summerhill Stud, turned that narrative around and made the Midlands a powerhouse of the industry

A profile article on Robin Scott in Sporting Post archives records that he was born at Marianhill in Natal on 20 May 1935, and spent most of his early years at Isipingo Beach on the South Coast. He was educated at Durban High School.

His introduction to the industry in the 1960s was via brother Des and a friend, the late sportsman and breeder George Rowles, who also had a stud farm at Nottingham Road.

The Scotts first venture into breeding was via a broodmare called Crashland, who was in foal to Bairam when they bought her. The colt foal was Knockwatch, who went on to win the prestigious Clairwood Winter Handicap and kickstarted more than 50 years of breeding winners at the highest level.

The Scott Brothers dispersal sale was held at Highdown in July 2018.