The hosts went unbeaten in six matches, which included three wins against a gutsy Uganda side and three victories over underdogs Namibia. 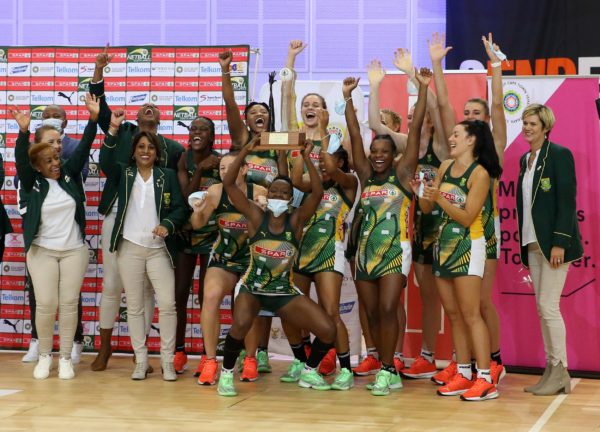 Though they coasted to a series clean sweep in the Spar Challenge Tri-Nations in Cape Town, Proteas coach Dorette Badenhorst believes her team can take tremendous value from their dominant campaign.

Despite being rattled again by a rising Uganda side, South Africa wrapped up a series sweep on Wednesday, fighting back in the third quarter to secure a 44-32 victory in their last match of the series at the International Convention Centre.

The hosts went unbeaten in six matches, which included three against Uganda and three against underdogs Namibia, and Badenhorst was pleased with the performances of some of the younger members of the squad ahead of next year’s Commonwealth Games in Birmingham and the 2023 World Cup in Cape Town.

“These were ranking matches, and because Uganda are in the top 10, we get good ranking points from beating them,” Badenhorst said.

“It was also valuable to see the depth of talent in the next tier of players. Some of them will play at the World Cup and it is good to see how much talent we have.” Refiloe Nketsa in action for the Proteas during the Tri-Nations in Cape Town. Picture: Reg Caldecott

Badenhorst admitted they had been exposed up front after being placed under pressure by Uganda, whose erratic and aggressive approach made them difficult to contain.

“What is worrying is that our shooters’ percentages are too low,” she said.
“It’s no good the centre court getting the ball to the circle if the shooters don’t get the ball in the net.”